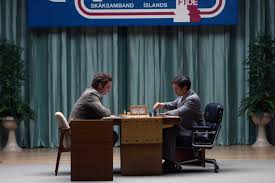 Ah, the Cold War. That frightening time in our history when we practiced Drop Drills (the Russians were coming), were terrified by youth group leaders into memorizing even more Scripture (the Russians were coming), and went to bed in fear that we might wake up to a world in which we would have to Learn Russian (I should have. Half the associates at my local Wal-Mart speak nothing else, at least while they’re working.). Once I mentioned aloud that I wanted a “Mao Jacket” and was roundly castigated for “going soft” on Communism. I was 17. I liked the frog closure at the top. No, Mao was not Russian, but he was Close Enough. (He was also dead, but this did not matter.)

Also, apparently it was part of our National Pride to be the country of origin for our guy (who was Good) who could play chess better than their guy (who was Bad). Because, if an American champion can beat a Russian–excuse me, SOVIET (as if “soviet” is a nationality)–champion, then we can put up another tally mark in our column on the Who’s Ahead Board. Never mind the American champion is going stark raving berserk from the pressure. “Mr. Fischer, you don’t mind carrying the weight of our Entire National Honor on your shoulders, do you?” What do we care–dogs into space (at the cost of the dogs) or win a few board games in Reykjavik (at the cost of our guy’s sanity)–so long as We Win. (Were we traitors for cheering for Olga Korbut? Or that huge guy who used to lift weights in like fifteen Olympiads? Remember him?)

Back to Pawn Sacrifice.

So, this is a movie about Bobby Fischer, an American chess prodigy who got so good at moving his pieces around a board that Richard Nixon and Henry Kissinger got all fired up about it. Which reminds me of another Cold War memory from Junior High. We didn’t have Facebook, so we did things like sit around and play ADD UP THE LETTERS IN YOUR NAME TO SEE IF YOU GET 666, and apparently, you could add up the value of the letters or vowels in Henry Kissinger’s name and figure out that He Was The Anti-Christ. Because that’s super scriptural. (Maybe there’s an app for this now. “What supposed anti-Christ figure are you?”)

Figuring out who was the Anti-Christ figured large in the Cold War Christian Kid’s manual of how to be afraid of the Russians. Because they were coming, probably soon, and definitely you were going to have to inform on your parents, but no one would inform on you because you weren’t holy enough: “If you were arrested for being a Christian, would there be enough evidence to convict you?” was one of those Christian-school chapel messages thrown at kids sitting in alphabetical order to make them feel the need to Come Forward. (Bonus, if you come forward, you miss half the next class and maybe you can get out of the pop quiz because you were busy rededicating your life.) Rapture Fiction was already going strong in the 1970s (the time about which I am most familiar in the Cold War paranoia, because after that I was grown up and worried about other things like lesson plans and taxes and scaring kids about the Coming Russian Invasion–it was way easier being on the Scaring End of that than on the Scared End, and I apologize to the 5th Graders of 1981 and 1982 a whole whole lot, and not just for this.), and a lot of it was based on the idea that The Tribulation prophesied in Revelation and setting us all into a frenzy of fear was Exactly Equal to what Russian Christians were already suffering at that moment and had been since 1917 and even before that, because life under the Tsars was no picnic, amirite? Anyway, don’t get me started on what American Christians think equals “persecution” (being laughed at for doing something stupid comes to mind). Plus that general fear that gripped you when you got home and no one was there and you knew for doggone sure you had been (cue scary Larry Norman music) Left Behind.

Bobby Fischer (Tobey Maguire) goes to Reykjavik (spelled it right the first time, woot!) to challenge World Champion Boris Spassky, who is played almost entirely mutely by the great Liev Schreiber. I’m game for watching Liev Schreiber play all sorts of characters without speaking, now that I’ve seen him do so with such expertise here. Henry Kissinger has more words in his movie than Liev Schreiber.

Hey, did you know that Dr. Kissinger is still alive? Dude is 92 years old, has been married to his wife since 1974 (that is, since I was terrified that the Russians were about to Take Away the BIBLE, so we’d better have most of it memorized, hurry up very very quickly; does anyone know any passages from Obadiah?), has a bronze star and a Nobel Peace Prize and runs Kissinger Associates? Nice work for a sometime anti-Christ, if you can get it.

Fischer doesn’t want to play Kill The King unless conditions are just right. That gets worked out. Lots of suspenseful chess ensues, including shocking moves that stun the audience. I love the level of intellect that realizes, “OH NO! He moved his rook! In 14 moves, it’ll all be over!” Mostly, because when I play chess, I can see roughly one move ahead, possibly two, if I’ve had a lot of caffeine and am not worried about imminent Russian advances or terrifying secretaries of state who Weren’t Born In The United States (I’m not kidding, Dr. Kissinger had us shaking in our clogs and striped bell-bottoms with rope-and-bead belts. Because United States citizens who have risen to Cabinet posts AND ARE JEWS are always wannabe beasts or false prophets.).

We win. Duh, it’s the Cold War. We were always going to win. Because Dollars. And they were Starving to Death and trying to recover from Stalin at the same time, while trying to cosmonaut it up at our Neil-and-Buzz level, Good Luck with that one, Russkies! Which is not to say we shouldn’t have been afraid. At any moment some shoe-banging Soviet Dictator could have decided not to turn his missile-carrying boats around. Or any number of other disasters could have overtaken us. But it’s easy, now that we’re on the other side of that, to make snide comments. Unless you want to start talking about How Scary China Is. Which I don’t want to do. Because no.

The movie is definitely worth seeing. You understand the title refers to Mr. Fischer, right? Never mind his mental clarity or need for psychiatric care–we’ve got to Get Ahead of The Bad Guys. What nonsense are we doing like this now in whatever quest we’re currently on? Let the kid play chess. There’s no need to make a federal (or international) case out of it. Of course there’s some footage of Real Bobby Cracking Up In Public at the end. I’m not sure that was called for, but whatever. I’ve cracked up in public myself. Happily, before cell phones. Once, memorably, at a bowling alley, but that is a story for another time.