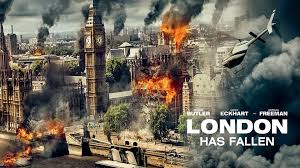 Here is a movie where everything goes all explody and bad guys are rushing out of hidey holes like mice before an earthquake and everyone is shooting everyone, and you can’t tell the good guys from the bad guys, so you just open fire on everyone.

Sometimes life is like that. Sometimes it seems as though everything is on fire. Your world has exploded and continues to explode and you can’t trust anyone, and the people you think you can trust turn on you. When this happens, if you are a Secret Service Agent, you do your one job, and that is to protect the President. If you are you, you identify your one job and you do it.

You feed your child without regard to how you get the food. You walk away from your abusive marriage and worry about where you’ll lay your head later. You jump out of a window and pray there is somewhere to land that won’t cost you more than a broken leg. You do the One Thing you need to do and you do it right now and damn the consequences, because not to do those things is worse than doing them.

That was one of the thoughts I had while seeing this movie. The other was this:

Set up–a character mentions “in a thousand years” and follows with a description of how great America will still be.

Thought–America is that longlasting. Not in a Thousand Year Reich sense, but in the sense that Liberty thrives and grows. Liberty as we have it today–vast and expansive–would not have been understood by most of the world when we started working on it 240 years ago. When people say, “Your liberties are under attack,” they actually mean, “Your liberty to tell people to live as you live is under attack.” Liberty itself has metastasized. Globally.

When I was a child–as I’ve mentioned many times on this blog, so forgive me if you’re bored of hearing Cold War references–we were endlessly taught that the Russians were coming and that even if they didn’t, the USA was on the exact precipice of moral catastrophe, teetering toward the outward edge. The cliffs of our moral high ground were eroding at such a rate that national collapse was inevitable and imminent. Rome, we were constantly told, was destroyed from within, because of moral decay. Never mind the Visigoths. Two hundred years was foretold as the outside limit of how long a free people could exist without having ridden the slippery slope to destruction.

But no. People see Liberty and they want some of that. Marginalized people the world over see America, and if they can’t get here, they want to build it where they are. Within their culture and with what they have on hand. This love of Liberty and desire to get some is our greatest gift to the world. America has been the cultural equivalent of taking a kid to a candy store and saying, “Look there. If you work hard, you can earn up and have some.” The candies, of course, are the zillions of freedoms we enjoy daily. Blessings on all who are working toward having some of that, wherever they are and whoever they may be.

And oh yes, the move also had a plot:

There has been a death at 10 Downing Street, so all the important people have to go pay their respects. Someone wants all these important people to die, so there’s a lot of guns and bombs and grenades and exciting car chases and things blowing up. Our Secret Service Agent knows he has one job to do, as mentioned above, and his doing of that job is what the story is about. Protect POTUS, never mind anything else, or die trying.

So I leave you with this thought. If all around you is exploding and imploding and fireballing and catastrophizing and you have no idea who is your friend or whether there is anyone you can trust, feed your baby. Protect your children. Safeguard yourself. Do the job you were given to do. That is all.

If you can do your job in a nice, neat, corners-tucked-in manner, that is better. But if not, not. Sometimes life is messy. Sometimes you have to look around at the end of the day and say, “This day sucked, but my child is fed and safely in bed.” And then you do it again tomorrow. Because you have a job to do. And when people tell you, “You should have done it in this neater, nicer way that doesn’t offend me so much,” well, you know what to say.

And also, use your liberty. Because if you don’t, what is the use of having it?