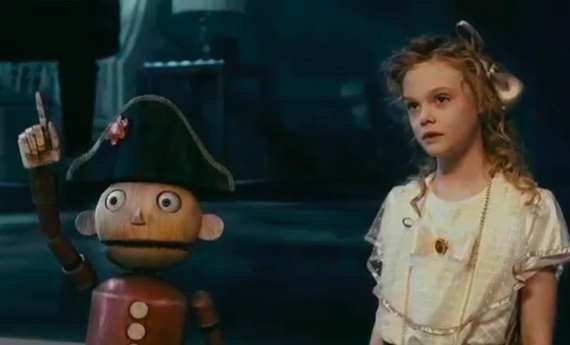 Animated by the premise that I disagree with everything Roger Ebert says, I tried as hard as I could to enjoy this movie. I completely failed.  This may not be the worst movie ever made, but it is surely the worst movie I have ever subjected myself to, and I’m including here the disastrously awful Jurassic Park III, in which I hoped that horrid ungrateful little boy would be torn apart by T-Rexes.

At the very beginning of the movie, I was informed that this movie is a “UK/Hungary production.”  I smiled, because I am myself a UK/Hungary production if you go back only two generations! (That we were always called “Reynolds” as opposed to “Goldberger” is a family shame…but I digress. The point is that I thought the UK/Hungary thing was neato and portended at least a watchable show.)

Let’s be clear that the original story of the nutracker is horrible–there’s a hairy Rat King and a wooden soldier who becomes a Man in Tights–and that only the music and the ballet save it. Sans the ballet and with inane words added to the music, all the beauty is gone. Add in toy crematoria and an effeminate, tap-dancing Hitler with a wig-changing mother who casts curses and drinks rat juice,  and you have the ingredients of an utter disaster. That someone thought of this is not surprising–artists think up all sorts of nonsense.  That someone financed it is simply not forgivable, may they lose all their money.

I suppose a sort of parlor game could come of this movie. People could sit around munching pretzels and someone could say, “I know! Let’s play, ‘List the top 100 bad things about Nutckracker in 3D.‘”  There are at least 100.  In fact, this could be a real reason to watch the movie. Sort of a What’s Wrong With This Picture exercise.

Enough said. This is a tremendously bad movie.  I went alone, and when I got home, my middle son said, “Mama! Are you okay?” I looked that bad. Speaking of looking bad, Mary (played by Elle Fanning, Dakota’s little sister)–don’t ask me why her name isn’t Clara–goes to tremendous lengths, climbing conveyor belts of toys on their way from the Ghetto to the incinerator to save the Prince, who then says to her, “You look awful.”  Poor kid, he didn’t have a good part, but he played what he had woodenly. Can’t blame him, I suppose, as he plays a nutcracker named NC who is voiced by Shirley Henderson, the young lady who brought us Moaning Myrtle.  He appears again later. This time Mary is awake and her parents have come around to the realization that their daughter’s nightmares are an integral part of her waking life. Mary walks up to the boy who is introduced to her as Nicholas Chance. He says to her (wait for it)…”Everyone calls me NC.”  Deep groan from me, but no one heard it.

That’s because I was all alone! I actually had a private showing!  This was not, sadly, because I am a much-read movie blogger, but because everyone else had the sense not to show up. It did make the movie even creepier than it would have been to be a woman sitting alone in a dark movie house.  On the plus side, at least I could pay attention and not have people rush past me on their way to demand refunds. Nor did I have to listen to any crying children.  Anyone who brings their children to this movie is served right if the poor kids cry all the way through.

Not to beat a dead rat, but this is an awful, horrible movie (did I mentioned it’s in 3D???).  Not an analogy of WWII. Not a way to introduce your children to the horrors of war or the Final Solution. If you want to do that, for goodness’ sake, show them Schindler’s List.  No one should see this movie.