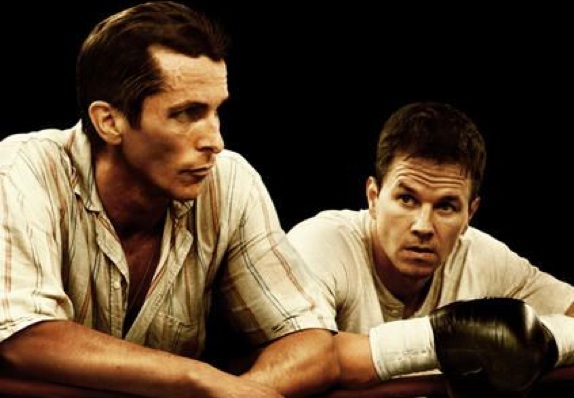 The Fighter has Oscar written all over it. Mark Wahlberg and Christian Bale star as half-brothers, Micky
Ward and Dicky Eklund, both former professional boxers, and both members of the family for whom the
word dysfunctional must have been coined.

Despite superb acting by Wahlberg and Bale, and despite exciting fight action (both in the ring and
out of it), and despite the defeat-to-victory scenario, I felt as if I were in a sociology class, peering
voyeuristically into the bizarre world of the Ward-Eklund family, which is, after all, a real family.
The Wikipedia article about The Fighter notes that Wahlberg wanted to play Micky Ward because
the “ordinary family” appealed to him. If this family is ordinary, we all owe a big fat apology to the Royal
Tenenbaums.

Ruled by Alice, a 60-something matriarch in stilettos who has seven unmarried grown daughters living at
home (some of which look very much the worse for wear, and all of whom have awful hair), the focus of
this family is on its two boxing brothers, in particular the elder, Dicky.

Dicky once fought Sugar Ray Leonard, which is why he is known as the “Pride of Lowell,” as in
Massachusetts. Alice manages her sons’ boxing careers, never mind that the younger son is 31 years old
and losing consistently. Alice is also entirely unaware that Dicky is a crack addict. She becomes angry
when Micky gets a girlfriend who doesn’t kowtow to her. Cat fights ensue as these women vie for power
in Micky’s life, and I mean all seven of the daughters, the mother, and the girlfriend. Instead of going
to England for a shot at the welterweight title, these people should have all gone to family therapy and
stayed there.

Holding up the screenplay is the f-word, which operates as a sort of scaffolding without which the script
would collapse. If this word offends you, you will not be able to comfortably watch this movie, as here it
is used constantly by everyone.

The movie begins with Micky and Dicky talking into a camera. They are being filmed by HBO. Dicky tells
us that the film HBO is making is about his anticipated boxing comeback, but we can see that he is not
coming back to anything; clearly, he is not well. Later we learn that the film is actually about Dicky’s
descent into crack addiction. Along the way, he goes to jail.

With Dicky gone from the picture into the slammer, the girls fight it out over who is going to be in
control of Micky’s life and career, and—no surprises here—the girl he is sleeping with wins. Sanity and
hard work prevail and Micky finds some professional and personal success.

The end is heartening. You feel happy that you came. It’s not Rocky, but hey, we all love a winner.

Then the credits roll. And you see the real Micky and Dicky. Why do filmmakers feel obliged to do this?
I really wish they hadn’t done it here. The real Dicky looks extremely hard-used. He doesn’t look like a
52-year-old former professional athlete, clean and sober since the early 90s when the events in this film
occurred. Again, I felt like a peeping-tom looking at someone’s private shame.

When I got home I looked Dick Eklund up on Wikipedia. As I suspected, things are not going so well
for him these days. I hope he doesn’t squander the money from this movie on anything other than
professional help and spiritual counsel.

Lessons to be taken from this movie: leave your grown children alone. Work hard. Don’t use drugs. If
your family is this strange, move away.

Not for kids: language, one scene with a girl in her lingerie getting ready to have (but not having) sex.
Also drug use. However, if your kids are grown and they’re mad at you for how you raised them, send
them tickets. Let them know you weren’t as bad as you could’ve been. Alice has you beat, guaranteed.
(Melissa Leo who plays Alice is sure to get a best supporting actress nomination. She knocks this awful-
mother role out cold.)