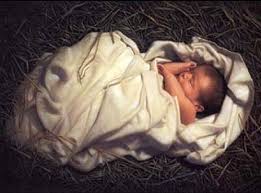 “And she brought forth her firstborn son and wrapped him in swaddling clothes and laid him in a manger.”

“You shall find the babe, wrapped in swaddling clothes, lying in a manger.”

“They came with haste and found Mary and Joseph, and the babe lying in a manger.”

This scene has been scrubbed so clean in our crèches and Christmas cards, that the question being begged is never so much as imagined: Why would anyone put a baby in a manger?

Women immediately post-partum hold their babies, nurse their babies, cuddle their babies, sleep with their babies in their arms. They don’t put them in feeding troughs. (Don’t get me started on the misstatement-that-won’t-die, that Jesus was “born in a manger,” as if Mary, full-term and ruptured, hopped into the cow trough to push.)

Let’s say for the sake of argument that Mary was exhausted from days of contractions while traveling in a wooden cart for a hundred miles at full term. That she was fatigued beyond all weariness from pushing for hours. There is no doubt Mary was extremely tired.

Even so: Joseph was there. Joseph understood the preciousness of this infant, the history-pivot of his birth. If Mary was so weak she could not even hold the baby she had ached to hold for the past nine months, she would have lain down on the ground, placed some cloth next to her for the baby to lie on and nursed him to sleep. This failing, Joseph would have held him, or lain down with him.

Unless something had gone very wrong.

Was Mary hemorrhaging? Having a seizure? The devil spent a good deal of time during the life of Christ trying to kill Him. Perhaps he started early. Failing to kill the baby with premature birth, sepsis, exposure, or any number of other possibilities in a time of high infant mortality, maybe he made an attempt on Mary’s life, to deprive our Lord of his mother: maybe she tore, maybe the placenta wouldn’t expel, maybe she was having an asthma attack. It could have been anything. It must have been something.

Yes, it’s a conjecture, but it’s a reasonable one. Satan tries to kill Jesus all through our Lord’s life, at least starting when Jesus is a toddler, and maybe earlier. Whatever the particulars, healthy mothers don’t put their babies in cow troughs.

The over-exhaustion idea doesn’t work for me, because when the shepherds arrive, Mary is awake, and it is not possible to believe that Joseph woke Mary out of a bone-weary exhaustion to tell her that a few strangers have arrived to see the baby.

And, note the statement made about the shepherds’ visit: they found “Mary and Joseph, and the babe lying in a manger.” Mary and Joseph are separate from the baby. Maybe Joseph is tending to Mary. Maybe one of the shepherds has some medical knowledge that would help her. One can imagine Joseph saying, “Thank God you’ve come—please help me!” (In spite of the “traditional understanding” that Joseph was an old man, it is more likely he was a young man with not a clue how to deal with childbirth.)

So maybe God sent the shepherds for Mary’s sake, to save her life so that she could mother the Son of God. And of course, shepherds know all about caring for newborn creatures. It would be fitting indeed if God sent shepherds who regularly delivered ewes on the field to care for the newly-born Lamb of God.

The shepherds’ visit certainly calmed Mary’s heart: could you slog through cow dung after a journey of a hundred miles, scream your way through labor, and then look at your baby lying alone over there, wrapped up in rags, and not feel abandoned by God? The visit of the shepherds assured Mary that God’s hand was right here, right now. Their visit was something she treasured all her days. Good Joseph was certainly greatly encouraged by the shepherds showing up with the story of a whole lot of angels shouting Glory to God, once again confirming the miraculous nature of this baby he was to father.

Childbirth is a loud, messy business. There’s very little silent-night-holy-night about it, especially when it occurs in a cattle pen, perhaps out in the open, surrounded by a lot of other travelers who are not happy about the screaming lady with no epidural a few yards away, followed after a while by a wailing infant, especially an infant who is not being tended, but put off in a trough.

There’s so much we don’t know about the birth of Christ, and this is instructive as to the story’s relative importance in the light of later events, because when it comes to the Crucifixion and Resurrection we know dates, times, places, names, exact dialogue, and even emotion. Here the description is far more spare, so we can’t be sure about much.

But I am certain about this: no woman willingly puts her newly-born infant in a feeding trough. In just a few verses in Luke 2, the manger is mentioned three times. Maybe we were meant to ask why.

One thought on “Did Satan Try To Kill Mary?”