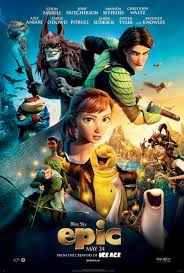 What’s a mother to do? Your kids want to see a movie and you have no objection except that it looks “dumb”? I went. It was fine. It was kind of cute. In fact, my biggest problem was the title. Epic why? For the sake of marketing the silly thing, perhaps? Or maybe Epic is short for e-pic, as in “We made this motion picture on computers”? Because, obviously it should have been called Secret Little People in the Forest or Tiny Elves Versus Tiny Orcs or even Christoph Waltz Awesomely Voices a Villain While Sounding Just Like that Evil Man He Plays in Inglourious Basterds. You pick, but Epic, seriously? Because it isn’t epic in any way.

Appropos of that question, I found this:

I don’t know Spanish at all, because I don’t like to do what everyone else does, which is why I didn’t read Lord of the Rings until it was required in college (“Christian Classics” or En 202), and why, in high school when I got to pick whether to take language class from Senor Mantzke or Monsieur Mantzke, I chose Monsieur, never mind I lived in Southern California. (Pause to remember Ron Mantzke, who died a couple of weeks ago. Adieu, Monsieur.)

Going on, I don’t know Spanish, but I’m pretty sure that “el reino secreto” doesn’t translate to “epic”. Someone clue me in.

Anyway, there’s this nutty father who thinks there are little elves and orcs in the forest, but no one believes him because he’s basically crazy. His daughter comes to visit and tries to bug out the moment he’s out of the way, because he’s certifiable nut-house material. Happily, she finds the little people and falls in love with a tiny man she could carry around in her pocket if she wanted to, and frankly, sometimes that would be a blessing.

The credits are really pretty, and I mean it. The screen never goes to just black with words crawling across it–the credits tell a story all the way through, although it doesn’t resolve as I’d hoped, which left me longing for Epic 2, wherein there is more Big People family involvement and they have to gang up with the little people to fend off Matt Damon and his giant natural-gas corporation (I haven’t seen that movie, so I don’t know how it ends, probably with him protecting the land from the evil capitalists–and down with them, you know?–with his own body.).

Rent it at Red Box later, because this weekend (and all other weekends for the foreseeable future) you will be seeing IRON MAN 3 or the beautiful STAR TREK: INTO DARKNESS.