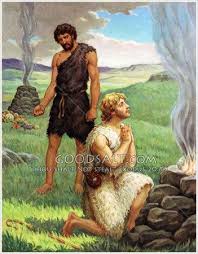 One of the reasons I dislike religious art is that the pictures are so memorable. You see them over and over again, and pretty soon you you begin to think that you are looking at truth, when in fact, you might be seeing only a little bit of the whole picture, an artist’s faulty conception of part of the truth, or even something altogether false.

Case in point, Cain and Abel.

You’ve seen the pictures of Cain and Abel. They’re young men, perhaps only teenagers, and they’re dressed in animal skins. They’re alone, except for Cain’s big pile of fruit and Abel’s spotless lamb. The pictures give us the idea that these boys are bringing God their first offering, having been taught by Adam that this is the thing to do, and Cain is such a big bully that he kills his brother because he’s mad that God likes Abel’s offering better.

Later we learn reasons for God’s rejection of Cain’s offering: “He should have brought a lamb,” or “he didn’t bring his best fruit,” or even, “Cain didn’t follow the correct liturgical order.” (No kidding, a very well-respected and well-known Reformed pastor told me this to my face.)

God is merciful to Cain after the failed offering. God comes to him and exhorts him to repent: to “do well” so that sin will not master him. Cain doesn’t listen. He does allow his fury to master him. Enraged, he lures his brother into a field and murders him.

God comes after Cain again, this time not in mercy. This time God pronounces judgment: “When you till the ground, it shall no longer yield its strength to you. A fugitive and a vagabond you shall be in the earth.”

Cain finally gets the picture. Not just thorns and thistles this time, but the ground itself will refuse to give up its produce. Even more than that, Cain, you’re going to be a fugitive: people will want vengeance.

Cain understands and is horrified. He says, “Now anyone who finds me will kill me.”

Based on the Sunday School picture of the happy family-of-four I saw as a child, I used to ask who that would be—surely Adam and Eve were not going to hunt Cain down. Then I realized that none of this happens until around Year 125, when Cain and Abel would have both been well over 100 years old and would have had children, grandchildren, great-grandchildren, great-great-grandchildren, and possibly even another generation or two after that. That’s going to add up to a whole lot of people who in a few hours or days are going to find out that Abel is dead, a whole lot of people who are going to want justice done. They are going to want vengeance.

How do I know all these thousands of people are there? Because God tells us in Genesis 5:3 that Adam was 130 years old when Seth was born, and in Genesis 4:25 that Eve believed Seth was a replacement for the murdered Abel. For Eve to assume that Seth was Abel’s replacement, the death of Abel and the conception of Seth are going to have to have some reasonable proximity. It would make no sense for Abel to die in, say, Year 30, and for Eve to comment 100 years later that the particular son she bore in Year 130 is the replacement for a son who died 100 years before.

Assuming even reasonable fertility, reasonable marital happiness, reasonable birth regularity, and so forth, Eve would have borne many, many children between Year 5 or so when Abel might have been born and Year 130 when Seth was born. We have no idea how many children they did have, but we do know that after the birth of Seth, Adam fathered more sons and daughters, so it’s safe to say he and Eve had one giant quiverful, a good number of them born between Abel and Seth, lots of them boys.

Here’s the point: by the time the Fateful Day of the Non-Accepted Offering arrives, there are thousands of people around. I’m no math whiz, but I don’t think it would be hard to figure out an approximate population of Earth after 125 years or so starting with one fertile couple and assuming a generation of 25 years. I’m going to assume some infant mortality, some death in childbirth, and a regular death rate by accident and illness in here, too. There is nothing to make us think no one has died prior to Abel’s death, or even that there has been no other murder.

It’s the time of the yearly offering. Year by year everyone brings his offering unto the Lord in remembrance of the lamb that was killed to provide the covering for Adam and Eve after their expulsion from the Garden, and in anticipation of the One who will crush the devil’s head. Year by year, Adam tells the story of sin, repentance, and forgiveness as each one repents of his own sin and cries to God for mercy. God, as he often does in the Old Testament when accepting an offering, answers with a fire that consumes the offering.

Cain doesn’t believe. We know that Abel does, because he is called a prophet by the Lord Jesus (Luke 11:50, 51). For some time, perhaps for many years, God is longsuffering and has mercy on Cain and accepts his offering. Then, at long last, God has had enough of Cain’s unbelief, his hypocrisy in bringing an offering. The yearly offering comes. Abel offers and God answers with fire. Cain offers also, but this time there is no fire.

Thousands of people are watching. No fire. Cain waits. Everyone fidgets. Perhaps someone snickers. Perhaps people begin to say, “I knew this would happen one day.” What goes on in Cain’s mind we know. He is humiliated, and then he is enraged: not at himself for not believing, but at his brother the prophet.

God cautions Cain, but Cain kills Abel. God pronounces judgment, and Cain realizes what he’s done. At last, he cries to the Lord in desperation, and God (what mercy!) puts a mark of protection on him. Cain is still very afraid. He takes his wife and runs. No doubt the search parties are close behind. He travels east, builds a walled city and lives his life looking over his shoulder. There is no evidence that he repents or attempts to make amends. We don’t hear any more about him, except that his descendants seem to be cut of the same cloth.

Eve is devastated that the one she thought would be Messiah is dead. But, a year or two later, she has a son Seth, whom she takes as a replacement for Abel. Eve says: “God has appointed another seed for me instead of Abel, whom Cain killed.” The term “seed” is used in the early chapters of Genesis to refer to the coming Messiah in whom Eve has believed since the first promise in Genesis 3:15. Eve is not saying, “Now I have a third son to replace my second son whom my first son killed.” She is saying, “I believed Abel to be the promised seed, but now I believe this new son Seth is the one promised.”

The Bible has a point: It’s about Redemption. The coming of the Messiah is in view throughout Scripture, and here we have the first bits coming together. Not Abel, but Seth, will be the forefather of Messiah. That’s what the account is about; it’s not about who the first murder victim was. It’s about narrowing the field. We knew before the Messiah would be a descendant of Eve. Now we know that, out of all her children, Messiah will be lineally descended from Seth.

So, back to my first point: we don’t know that Abel was the first person to die. The world was cursed and everyone was a sinner. It would be quite astonishing given just those two facts to assume no one had died in 130 years. Or even that no one had yet been murdered. Likely people fell off cliffs, drowned in the Euphrates, killed one another in anger, ate poisoned berries, died in childbirth, and so on.

The point is not that these people were perfectly healthy and perfectly kind to one another—in just a few more generations, there’s only one righteous man left in the whole world!—but that they needed, as we need, a Savior. That He was coming.

What we do know about Abel is that he was the first martyred prophet.

We know this because Jesus, speaking in Luke 11:50 and 51 says, “. . . the blood of all the prophets which was shed from the foundation of the world may be required of this generation, from the blood of Abel to the blood of Zechariah. . .” Jesus is not saying that the blood of all people ever killed is being required, but only the blood of the prophets. Abel was martyred because he came to God in faith and his brother hated him for it. But not to worry. Seth was coming, from whom descended the Lamb of God.