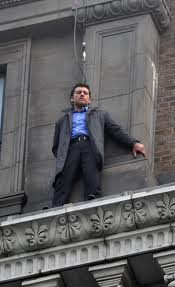 I liked this movie. There’s a man on a ledge, already, and he’s always looking down, down, way down, to the ground, which is super scary for someone like me who was never even able to climb up the high dive at the city pool.

Scary is good. So is getting back at really bad guys who hurt good people. It’s also fun to argue with people about the merits or demerits of vigilantism, and is it okay to do something super wrong in order to stop a super bad man from hurting a just-plain decent individual.

The girl strips down to her pink lace for about five seconds, just be aware. There’s no hanky-panky, don’t worry, she’s just trying to get into a cat suit so she can shimmy down the duct-work, that’s all.

Story: Officer Cassidy (Sam Worthington) was accused of taking a hailstone-sized diamond (ha ha, I always wanted to say that) from David Englander (Ed Harris super old and crinkly: they’d never let an older woman look like that on film, unless she was a Christian with way too much make-up and really long fake eyelashes glopped with mascara), the token One-Percenter. Cassidy goes to prison for a couple of years, but is then let out on humanitarian leave for his father’s funeral. After the funeral, he goes berserk, and a few moments later (in movie time, that is) he’s standing twenty-one stores up on a lovely day in New York City.

Someone notices. The police are called.

(I recently realized that no matter what you do, if you do it long enough, the police will come. This is true if you are whistling on the sidewalk, reading a book at the beach, or meditating in church. At some point you have to move along, or the law will intervene. You could stand anywhere—it doesn’t have to be twenty-ones stories up, and I only bring it up here in case you are in need of a long rest in a psychiatric facility.)

Negotiators arrive. People on the ground shout, “jump!” A tall man lounges around homelessly, and you instantly like him. There’s a reason for that.

Across the street, Officer Cassidy’s brother and his girlfriend are up to some shady shenanigans (okay, outright Ocean’s type burglary), and that’s what’s really happening in the movie. The man on the ledge is just standing there, after all, while the real action is going on across the street.

There’s lots of suspense which becomes more densely packed and frantic as we get to the end. Good conquers evil. We all cheer that the bad guy got his. All’s right with the world, and we just try not to think about the fact that you know, you just can’t do this sort of thing. Still, to watch it was fun, and I think a lot of people will enjoy this flick.

Maybe it’s all the diamonds. Diamonds are just great. I wear a really big fake one that gets a lot of comments, once from a young man I was actually afraid of—“Wow, Ma’am, that’s a large diamond you’ve got there…”—so much so that I told him he could have it for what I paid, that is, $53, but I would have given it to him for free if he’d come one step closer.

2 thoughts on “MAN ON A LEDGE, starring Sam Worthington”