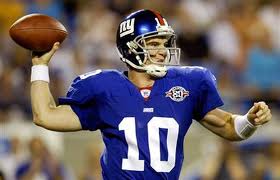 In preparation for the Super Bowl in a couple of weeks, I’d like to offer a few insights gained today from watching the championship games. No, I’m not talking about the fact that the pants are way too tight. Nor am I talking about how primitive it is still to have chains run out onto the field to see if the offense has gained a first down. (What if the chain placement is wrong? What if they don’t run straight? Can’t they put a GPS chip in the ball so it lights up when it crosses the first-down? Seriously, people, cars can park themselves and we are measuring first downs like cave men!)

I’m talking about the parallels between football and the Christian life. Or what should be parallels, but often aren’t.

(By the way, this type of thinking may help you if you don’t think you should watch football on Sunday, but your spouse is going to watch and you want to be with him/her. You can sanctify it by keeping your mind on things above while watching the game and being sweet about it.)

Here’s what I mean:

In football, you just keep moving forward. You don’t look back at the fumble in the last quarter, the missed tackle on the last drive. You set your face like flint toward the goal line and you progress toward it with determination. With energy. You shake off the missed field goal, the dropped ball, the facemasking, and you put one foot in front of the other. What happened in 1945 or 1987 or 2004 or yesterday doesn’t matter. Keep moving.

In the Christian life, this is often not the case. In some settings, if you dropped the ball in 1962, you’re simply thrown out of the game, dismissed, tossed aside. Not only is 1962 held against you, but in some places, it will actually define you. (“You know, he could have been a deacon, but his first wife left him for another man!” Never mind that he has been married to his current wife for thirty-five years, taught Sunday school since 1970, and led hundreds of people to Jesus.)

In football, your opponent is always focused on getting the ball from you. Always. He will take advantage of any lack of focus, any slip-and-fall. He will reach right into your arms and grab for it.

In the Christian walk, the parallel is obvious. The ball is your Faith in Christ. The enemy knows you have salvation, but he wants you to doubt it. Don’t. Hang on to that ball. Run away from your opponent. Get your friends to knock him out of the way for you. Have someone cover for you, block for you, and do a happy dance in the end zone with you when you overcome.

If he can’t get the ball from you, he will try to stop you from going one yard farther. He will knock you down and knock you down hard. He is not worried about whether you’ll be hurt, get dirty, or quit the game. He doesn’t care that you really want to win. He doesn’t care who is at home cheering for you. He wants to stop you, and he will do whatever he can to accomplish that. Keep going. Don’t be stopped. Take one more step. And another.

In football, after third down, when the punting team goes onto the field, people on the sidelines rush up to the quarterback and squirt Gatorade into his mouth. They throw a jacket around his shoulders. They attend to him so he can get back out there on the next possession. They pat him on the back. They say good job.

Sometimes this doesn’t happen in Christianity. Sometimes you work for seventeen years in the nursery, and no one ever says thanks. Or knows your name. You sang in the Easter cantata every year since 1975. You drove the bus for ten years. You still “ush” even though it hurts you to walk up and down the aisles since your arthritis kicked in. Thank you, friend. Thank you so much.

Speaking of Gatorade, it’s full of electrolytes. It recharges you. It’s energizing. It’s not just a slap on the back and a word of thanks. It’s a pumper-upper. It’s a you-can-still-do-it. It’s a Go You sort of drink. Hand one out. Hurry.

In football, when you get hurt, you can lie there on the field until someone comes to help you.

This is sometimes the case in Christianity, but sometimes (sadly) not. Sometimes when you get hurt, people will let you bleed all over the place—“You made your bed, now lie in it!” or “You should have known not to take an adjustable rate, silly!” or “I told you you’d get lung cancer if you didn’t stop smoking!” They don’t come running.

Sometimes in Christianity, when someone is hurt, other Christians don’t even want to be seen to be on the same team as the hurt believer. They’ll rush to their cars and leave the stadium completely as your cry gets weaker, “Help me. I need you. Please.” Then, if a nice guy from the opposing team comes over and offers to help the hurt person up, why do you wonder why the offered hand is grasped?

In football, if you’re really hurt and you have to be helped off the field, the audience gets to its feet and applauds you. You poured your heart into that play, but you got smacked down. You got trashed. You got your helmet ripped off and the wind knocked out of you. No one says, “What a loser, he can’t even take a hit from a 330-pound defensive lineman.” No one says, “Stupid quarterback, can’t take a direct hit from Clay Matthews.” No one says, “Wassamattayou, Joe Theisman, can’t you walk with a broken leg?” (I still remember that moment. Shivers. If you don’t know, youtube it. Super cringe-worthy.)

In Christianity, when you get totalled on the field, people don’t typically cheer: “Woo-hoo! Maintained her integrity half-way through college, then got blindsided by Stephen Hawking and Richard Dawkins! Look, she’s down for the count, wait…wait…yes, she’s getting up!”

In Christianity, by the time she’s getting up, everyone is embarrassed at the fall and looking the other way. (“Shh, don’t talk to her. Don’t you know she had an abortion at Berkeley?”)

In football, the closer you get to the goal line, the more intense the opposition is. If you’re lined up on your opponent’s one-yard line and it’s first and goal-to-go, he is not going to say, “Well, here you are. You’re about to get a touchdown, so I might as well step aside.” He’s going to throw every single defensive tool he has right at you. Most of them weigh over 300 pounds, don’t like you, and have a few things to say about your mother. Be careful as you’re getting close to graduation, wedding day, retirement, whatever. Walk circumspectly, not fearfully, and remember that your opponent is still just as fierce as ever.

In football, the goal is simple. Get the ball to the end zone. Just get it there. It doesn’t have to be pretty. It doesn’t have to be without fumbles, without interceptions, without slipping in the mud, without being blindsided, facemasked, interfered with. You can get the ball there by running, by passing, by (we learned recently) doing a front-flip over the blocker, or even by throwing a Hail Mary!

In Christianity, all you do is keep living through it.

You hope, of course, that your life will be like a 99-yard kickoff return for the touchdown. Or full of glory where you are the star quarterback or the irreplacable running back—the OJ, I mean the Walter Payton, wait, I mean the Emmit Smith, stop, I mean…never mind. You get the point. You can and will be replaced. And in the meantime, you’ll fumble the ball. You’ll get sacked and intercepted. You’ll be interfered with (just when you were going to catch the game winner!), and you’ll interfere with others. You’ll exhibit unsportsmanlike conduct. You’ll lose your temper and yell at the ref. You’ll get hurt and have to be carried off the field.

And then, of course, you might lose your skills. You might get traded. A new kid just drafted might take your position. He might get paid more. Way more. People who never cheered for you in that position may now cheer their heads off every week to see him do that thing you did for years. You might feel sidelined. Let go. Retired.

Look around at the great crowd of witnesses in the stands. They’re all cheering for you as you walk (or stumble or crawl) rejoicing off the field.

Oh, and one more thing. In football, the girls don’t get to play. I think you know what I think about that.

One thought on “FOOTBALL and the CHRISTIAN LIFE”