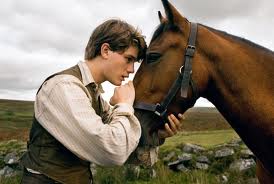 If you are the kind of person who collected plastic horses in your childhood, has traveled to Chincoteague to see the running (yes, I know someone who did this recently), and who still, even now, thinks life would have been better with a pony, you will love this movie, because it is just chock-full of horses doing all manner of horsey things.

I am not a horse person, or an animal person at all, though I have warmed to our new dog Chief because he’s sweet and does what he’s told. Maybe if I was a horse-lover, I would not have cared about a variety of things that did bother me in this very long movie.

One of the things is the constant place-shifting. This movie is more of a travelogue (horsealogue?) than anything else. Joey The Horse goes from place to place, sort of like the man in the Old Spice commercial—he’s in the shower, now he’s on the beach, now he’s riding a horse—and it’s disconcerting.

Somewhere in France, you realize how it’s going to end because a piece of cloth gets separated from the horse and you know (because of the importance of the cloth) that it has to end up with the horse again. I can see how this worked well in a book, where you can go from chapter to chapter more fluidly. I understand the book is written from the horse’s point of view, as in Black Beauty, and I think we need to thank Mr. Spielberg for not doing that to us in the movie, as I would have walked out, and I hate walking out of movies and only do it when I Can’t. Stand. One. More. Moment. (Troy, Mr. Popper’s Penguins, and The Green Lantern, come to mind.)

Still, it’s jarring when Joey goes off with this person, then that person drops out of the movie completely and we go on to the next person. This happens four or five times.

You can tell that they toyed with the idea of having the movie from the horse’s point of view, because you see Joey’s attachment to the other horse (name forgotten, sorry) and you can imagine that this was more fleshed out in the novel, perhaps with good effect, although when an author does this, one is left with the difficulty of explaining the genre to children who continually interrupt and say, “But horses can’t write!”

The pacing is quite slow through the first hour or so, and the movie as a whole is super melodramatic and overacted. The wide-eyed kid is too wide-eyed, the lazy father too pathetic, the landlord too one-percenty, the townspeople too townspeoplely, and so on. You are right in your suspicion that Mr. Spielberg produced, but did not direct, this movie. He should have been more hands-on and I think the movie would have attained the subtlety it entirely lacks. The beginning setting-the-stage part is way too long, the boy’s devotion to his horse is really crazy, but then horse people may be like that for all I know.

Speaking of lack of subtlety, there’s a moment when two opposing soldiers meet in No Man’s Land to do a good deed. The German soldier speaks better English than the English soldier, and you can tell that the movie-makers are shouting at you, “Look, can’t we all just get along?” when the truth is, no, we can’t all just get along when the Kaiser (or whoever) decides he wants to take over the world. We have a duty, and please God, we are going to do our duty.

If you want to get kids to learn about WWI, this movie may be a way of introducing that war to them. They won’t care about the one-dimensional characters.

I don’t care for the wife who justifies her husband’s constant drinking “because he’s seen things in battle,” though again, I haven’t been in battle, and maybe it will drive you to alcoholism, but if it does, please do something with the empties, don’t just litter your property with them—another example of the non-subtle nature of the film. We get that he’s an alcoholic already, you don’t have to have mountains of empty bottles lying around.

I did like how the Mother takes control of the situation when her husband is unable to do anything—he’s an emotional and physical cripple, and it Takes A Woman to threaten a man with a knitting needle to save the family, and I say, have some handy if you’re late with the rent, although, to be fair to the landlord, the wife should have threatened her husband with the knitting needles before he spent all the rent money on gallons of liquor and an expensive horse! (He buys the horse when he knows he’s already late with the rent because he “has a feeling” about it. If my husband brought home new car, for example, when we were late with the mortgage, because he had a feeling about it, he’d better worry about getting a feeling from my knitting needles, and I’m not kidding.)

The battle scenes are realistic (what am I talking about? How would I know?) in a Saving-Private-Ryan way, although not that gory because this movie was, I think, made for young people, whereas Ryan is for adults only. The shoddy recon done by the Raj soldiers is shocking—they send the cavalry into an encampment that is protected with machine guns, and for some reason the horsemen are armed only with swords. I hope this is exactly how it happened, because if they use the only people of any little-bit-of-color in the whole movie—the Indian soldiers—and make them responsible for the death of the entire company (except the 2 starring horses), I’m really not a fan. Into the valley of death rode the 300, based on some turbaned guys’ failed spying. Puh-leez. (If that’s how it really happened, fine, and then it’s the Brits’ own fault for failing to train the recon guys: “Dear Mr. Spy: Check for weapons,” and “Dear Mr. Cavalry Commander, FYI, swords don’t work against machine guns.”)

You’ll probably like this movie. I tried to, and I can see that kids might be benefitted from seeing it. They will see heroic kids, brave kids, loyal kids, kids who want to serve their country, kids who get their heart’s desire in the end. Maybe they should read the book instead, though, if they can deal with the literate-horse idea.

However, if you want to see a grown-up movie about WWI, may I once again recommend A Very Long Engagement?

I’m not a real fan of war movies for children. Personally, I think it might be wiser to talk about the wars they need to learn about, show documentaries, maybe a little Johnny Tremaine. But for teaching the war, I’m for waiting until they’re ready (14? 15?) and then showing them Private Ryan or Schindler’s List, but of course that’s the next war. For WWI, I’m not sure what all is available for teenagers, so go ahead and try War Horse.

The best part of this movie outing for me was seeing the trailer for IRON LADY. Bring it, Maggie! Bring it, Meryl! I soooo cannot wait for this movie. I’m not such a fan of ALBERT NOBBS, which looks like Yentl II, except without the singing and the Torah.