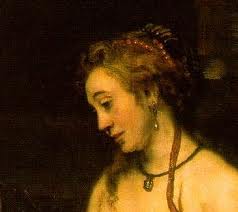 Proverbs 12:4 “A virtuous woman is a crown to her husband; but she that maketh ashamed is as rottenness in his bones.”

Proverbs 31:10 “A virtuous woman” is worth “far more than rubies” and that “the heart of her husband trusts in her. He will have no lack of gain.”

The Hebrew word here translated “virtuous” is used 243 times in the Old Testament. The word is transliterated “chayil,” and sit down, friend, because your understanding of this word is about to be adjusted.

Yes, you guessed it: it is translated “virtuous” only when it is attached to women: Ruth, a hypothetical woman in Proverbs 12, and The Lady Herself—Mrs. Virtuous—in Proverbs 31.

Frankly, we’ve been sold a bill of goods on this one, because along with our mother’s milk, we’ve imbibed the idea that the “virtuous” woman is a sweetly able, softly efficient lady who glides through her day cheerfully busy about the household. Sadly, she did have to work outside her home, but if we can do without that icky part, we’ll be better off.

Instead of being invigorated by Mrs. V’s amazing qualities, we are guilted into getting up early to get the oatmeal going (we don’t have maidens to direct), and do a little hand sewing, because, after all, she made belts for the tradesmen.

When the word is used as an adjective describing a man or group of men: man of valour, men of wealth, men of might, men of power, worthy man, strong man, able men.

It is crystal clear that this word chayil indicates strength, power, might, wealth, substance, and valour. Instead of saying, “Look, here’s a military word, and God is clearly indicating that these three particular women had valour and strength in abundance,” our translators shrunk back in their Jerusalem-chamber chairs and said, “Oh no, it’s about women, let’s soften the connotation.”

We don’t have to ask ourselves why the 17th century translators translated as they did. We know. These were the same gentlemen who were crafting and developing the common law of England that gave a woman’s property to her husband to manage, did not allow her to testify in a court of law, kept her from education, and hindered her in independently considering fields and buying them, making profits and planting vineyards, selling garments and sashes to merchants, you get my meaning. Everything she is described as doing in Chapter 31 is softened out by use of the word “virtuous,” because the translators, good men that they no doubt were, had certain societal, traditional, and yes, religiously-motivated norms they wanted preserved.

Remember, 1611 is less than 100 years after The Hammering On The Door. Women weren’t highly valued, weren’t seen as equal image-bearers. These men were operating in their time, and their time was oppressive to women. Sure, we were slowly working our way to full personhood, but, honey, we weren’t there yet, not by a longbow-shot.

So, when these men got to Ruth and got to Proverbs, they had already translated this word a couple of hundred times, but they couldn’t bring themselves to translate the word with its full power. They weren’t going there. “Virtuous” worked. They went with it.

Enter Mr. Strong (1890), and the jig is up. Now the ordinary inquisitive person can track the original God-breathed Hebrew word through the text and see the inconsistencies, the translation choices gone wrong. (When I was a little girl, I used to carry around the giant green Exhaustive Concordance and look up words by the hour. I was entranced by 8 or 10, and never recovered, but happily now it’s all online.)

Perhaps the translators knew we’d eventually realize that the lady they called Mrs. Virtuous is a powerful, able, efficient, strong, valiant woman! She is out there impacting her community. She is engaged in commerce. She has a voice and she speaks. Strength and honor cover her–she is all over strong, all over honorable. In a woman–hear me now–the words strong and honorable are linked: it is honorable to be strong.

Not only that, but her husband is not afraid of her or of her accomplishments. He happily goes about his business in the community. Nor are the kids intimidated or feeling abandoned. They rise up and bless her. They think it’s awesome that their mother commands servants, profits in her business, and speaks truth and kindness wherever needed.

She’s rich. Her household is clothed well. She has servants to direct. She even has enough money to give to the poor people she encounters.

No wonder her husband trusts her and has no fear of poverty. He knows she’s got everything under control. She’s not weeping in a corner begging her husband to lead her—she’s out there living her life in an active, productive way.

She’s not sitting home thinking of yet another craft to do, yet another home-arts class she can take, yet another way to fill her time because she “shouldn’t” get a job, teach a class, run a marathon, run a store, take a trip to Europe, join an investment club with money she’s earned, or whatever her heart desires to do.

(We’ll leave “plant a vineyard” for the Reformed Baptists.)

To be clear: they could have (and probably should have) said Worthy Woman, Valiant Woman, Strong Woman, Mighty Woman. They chose a soft word because they were afraid of what might happen if they said it out loud:

“A strong woman is worth more than rubies. Her husband can trust her, she’s going to bring him abundance.”

How she uses her strength, power, and might for the good of her family is her own business.

More to come, of course, because I can hear you: “But what about ‘Keepers at Home’?” Yeah, yeah, we’ll get there. Be patient. I’m a busy woman.