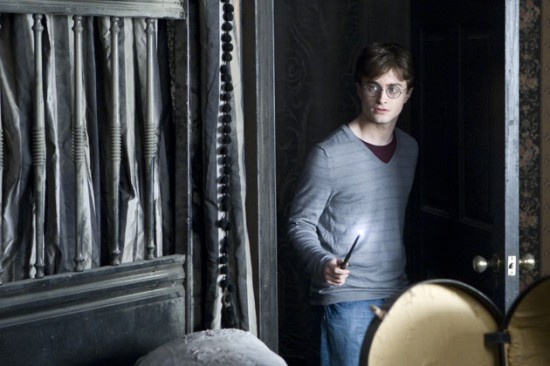 (Because of my Fundamentalist/Reformed/Calvinist position–and knowing the anti-Harry feelings held by many of my friends who might read this, there are two main parts to this post: 1) the whole idea of  Harry Potter and 2) my thoughts on the movie. I hope you will either read the entire post or not read it at all, as it is all one piece. Thank you.)

There is a wildly popular children’s book series taking up space in every library, every school, and most evangelical homes in America. The protagonist of the stories is self-willed and naughty, scoffs  at religious training, and is jealous of those who find happiness in doing right. As the series progresses and our protagonist grows up, a romantic alliance is made with an opportunistic liar who withholds life-saving food from starving people for his own advantage. Our protagonist castigates and ridicules the town’s religious leader, an unloved teacher, and a childhood enemy—using those people’s true names.  And yet, people love these books, some even making pilgrimages to the several towns in which the family lived (note: restless, wandering father who at one point forces his hungry, overworked family to live in an underground cave).

In another wildly popular children’s book series taking up space in every library, every school, and most evangelical homes in America, we learn that there is no difference between Jehovah and false gods, that it doesn’t matter what you believe, but that you believe. In the final scene of this 7-book series, a man who worships a demon is welcomed into heaven because (so it turns out) when he was worshipping the demon, he was actually worshipping God.

My dear, dear faithful and godly friends, you can have your Laura Ingalls and your Last Battle. Give me Harry Potter every time.

Give me Harry—with the clear black-and-white/good-versus-evil every time. Where Voldemort is always evil, and Harry is always pursuing good: not perfectly, but consistently.  Where the might of the Evil One is trained and focused on Harry’s destruction, and where Harry is protected because of the self-sacrifice of his mother. Where, when Evil is near and getting nearer, Harry has acute physical pain. Where Harry consistently seeks to go it alone so that his friends will not have to suffer with him as he faces Voldemort. Where friendship is true, enduring, strong, and lasting.  Not to mention that the entire work is fun, delightfully clever, creative beyond imitation, endearing, suspenseful, frightening, poignant, and (most importantly) satisfyingly finished as it should be: with good decisively triumphant over evil.

In late 2000, I became aware of Harry Potter when an article opposing Harry appeared in a major Christian news magazine. Shortly thereafter, I began to receive emails from godly friends who were sincerely afraid that this new series was not just another set of fantasy books, but was the Devil’s own tool to take over the hearts of our children and lead them down the frightening road to the occult and Satanism.

It has been my habit to try to avoid band-wagons. I wanted to know the answer to my question: “What in the world???” Why would so many good people be so freaked out about a children’s book? So, we went to the bookstore at the mall (back when malls had bookstores!), and I put a copy of Goblet of Fire on the counter. The lady said, “Have you read the other three?” When I said I had not, she told me to replace number four, and start with number one. Obediently, I purchased Sorcerer’s Stone, took it home, sat down, and read this line:

“Mr. and Mrs. Dursley, of number four, Privet Drive, were proud to say that they were perfectly normal, thank you very much.”

Delighted by this lovely, simple opening, I immediately called the family down and read the whole book aloud to them.  The next day, we bought the second and third books. When we had finished reading those aloud, I bought Goblet of Fire, a wonderful read. Since then, we were in line at Wal-Mart at midnight each time a new book was released, always buying three copies so we didn’t have to share.

Here’s a story: Spring of 2002. I’m teaching Special Ed. English at a public intermediate school in Hawaii. There’s a boy in my class named Gomez. He’s never read a book voluntarily in his life. After hearing me read books one and two aloud to the class, he picks up my copy of Prisoner of Azkaban. Three days later, I notice he is still reading it during classroom reading time, and that he is making good progress through it! I told him, “Gomez, if you finish that book, I will buy you your own copy of Goblet of Fire.” His eyes grew enormous.  “Really, Miss???” (They call you Miss in Hawaii—or Auntie—it is delightful.) A few days later, he finished book three. The first book he had ever read for pleasure, and it had over 400 pages. The next day I brought him book four. He said, “I never knew reading could be fun.”  This was not a child about to dive into any evil pursuit. This was a kid who didn’t know what it was to enjoy reading.

Okay, so this is supposed to be a movie review.

If you aren’t a fan, it might be too difficult to follow. The movie does not over-explain. It expects its audience to know what it is talking about, to know what has happened up til now.

If you haven’t been a fan, but think you want to give it a try, start back at Book One. Notice I didn’t say Movie One. Read the books first, for crying out loud! Then see the movies. Doesn’t everyone have that rule for their kids? Of course you do.

If you are a fan and you have read all the books and seen all the other movies, listen to me extremely carefully:

THIS MOVIE IS WONDERFUL. It is beautiful. It is frightening. It is riveting. It is heart-wrenching. You will have tears in your eyes before five minutes have passed—if you have children, you will cry.  There is a scene in the tent that is sweet beyond explanation.  There is heroic self-sacrifice. There is courage in the face of insuperable difficulties. There is Dobby with the cutest shoes ever.  And because this is Part 1, this movie ends exactly how it should. Intense, scary ending.

The music is wonderful, throbbing; the scenery vast. The child actors are children no longer, and their problems are gigantic and far-reaching. Muggles are being killed, Mudbloods tortured.  There are understated, beautiful performances by many secondary characters. The little we see of Draco is telling, if ambiguous. We wonder. We hope. Same for Snape whom I rooted for all through the books: something about him made me care and hope that in the end he would turn out to have been good all along.

NOTICE:  NOT FOR CHILDREN. This is a movie for adults. Please, at least preview it if you think your kids are all that mature. I told my children to put this one on their ten-year-calendars for their 17th birthdays. At 14, they’re watching Mississippi Burning, so that should tell you something. (Because everyone should watch Mississippi Burning and I mean it, but that’s another post, isn’t it?) There were little children in our theater, but this is a mistake. There’s no Hogwarts here. No Nearly-Headless Nick.  No Howlers. No Sorting Hat. School’s out: this is the real world, and it’s frightening. (There is an unexpected “skin” scene that is muted and unfocused, but obvious. Do not bring children.)

One more note: I have a dear, dear friend whom I love who said she could not even try Harry Potter because the “one Christian family” is made ridiculous. I think she was referring to the Dursleys, and I want to say that whoever told her that the Dursleys are a Christian family has slandered Christianity in every possible way. The Dursleys are the opposite of even horrible hypocritical Christians. They are cruel, heartless child abusers. Nor do they claim to be Christian, attend church, or do anything remotely connected with Christianity.   But that’s an example of unjust stones that are flung at Harry. There are many, many more. People are just trying to protect their children, and my goodness, it’s certainly not important that kids read Harry Potter. It’s just a set of books, after all. But they are loads and loads of fun. I have greatly enjoyed all seven books and all seven movies. July 15, 2011, is on my calendar for sure: I’m going as Molly Weasley, of course!