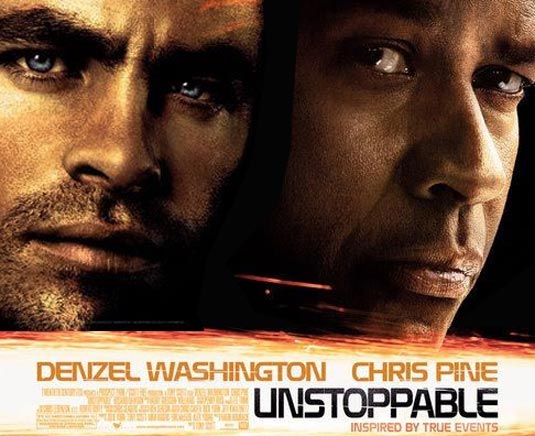 Silly me. From watching the previews for this movie, I thought it was about a trainful of children in mortal danger who are saved by the combined efforts of Mr. Washington and Mr. Pine.  The children are never in any danger, and although a big deal is made out of them during the first few minutes, they disappear from the movie fairly quickly and we never hear from them again.  They are not even afraid.

I have been in love with Denzel Washington since A Soldier’s Story, through Glory, and on through Inside Man, as everyone in my family can affirm, but whatever the man was paid for this flick was too much. He sits in a chair and talks to Mr. Pine, with the lone exception of the bit at the end where he’s fist-pumping the air in a Pennsylvania take on Leonardo’s king of the world stunt.  Yeah, there’s the bit with running on top of train cars, but I’m guessing they have expert train runners to do that sort of thing.

Speaking of love, Chris Pine and I go way back to 2009. I think it was the yellow shirt and the “Bones, buckle up,” that did me in, but whatever. Here, although he wears a yellow vest, it’s not the same thing. He’s a newbie train conductor with marriage problems that don’t make sense and a restraining order against him that would never have been granted, let alone increased by 30 days. This information (the extension of the TRO), by the way, is given to us by a man with a cell phone who is never identified and has no other purpose.

Okay, okay, I’m getting to it. Here’s what happens (Don’t read on if you don’t want to know what happens at the end): There’s this train, and a fat guy lets it get away because he’s too fat to run fast enough to jump back into the cab after jumping out to throw a switch. The train rolls off, but no one tells anyone for a while. Then for a while longer, no one tells anyone that the train is not coasting, but is actually under power. Then they don’t know what to do. They say they’ll evacuate all these places, but all you see is a bunch of people crowding the train tracks.

Stanton, Pennsylvania may blow up in a cloud of molten phenol combined with explosions from giant gas tanks that are certain to be destroyed when (not if) the train falls off the deadly S-curve there. However, everyone is just standing there looky-looing for all they’re worth. No one runs for cover. No one covers his face. Mothers even bring their children. Huh?

Chilean mine rescuers know to have three rescue operations going at once, but here in the US, we have just two men running down a train that’s about the destroy a city of over 700,000 people.  A funny man with a fast truck appears from time to time, we are not sure why. But, good thing he’s there (his name is Ned) because at the end, he drives his truck parallel to the engine, so Will (Chris Pine) can jump onto the engine, pop into the cab and put on the brakes. Why did we have to wait through an entire movie if all they had to do was drive up next to the train so someone could scoot into the front seat?

If indeed someone just had to go up front, and the train is 1/2 a mile long, and Frank (Mr. Washington) is already running from the back of the train to the front of the train, why not just go all the way and get in the driver’s seat? Even I could run 1/2 a mile in the time they have, although I do have to admit that jumping from car to car is something better left to Agent Salt (see earlier review) who can do this sort of thing with her shoes off. (This sounds like one of those old-fashioned math problems: A train is traveling out of control at 70 miles per hour. The man on top can run the length of one train car in about 15 seconds. If there are 80 cars, how fast will he get to the engine, and will it be in time to keep the train from bursting into flame and consuming a major city on the Eastern Seabooard?)

There are annoying helicopters throughout, and this is because Frank’s daughters  and Will’s wife have to be able to see what is going on on television. Hence the need for TV helicopters. I’m no expert in any kind of aviation, but I don’t know that helicopters can travel in fairly tight spaces at 70 or 80 miles an hour for a couple of hours at a time while staying about 20 or 30 feet off the ground. They have eye-level shots of the people on the train. In several scenes there are mutliple helicopters all flying in very tight quarters. You’ve got to think that the TV station owner is going to weigh The Scoop against the probability that he’s going to lose a news crew and a helicopter if he keeps up this nonsense. Safety first! However, if we didn’t have this “footage,” we would miss out on the emotional connection, such as it is, from the wife and the daughters.

So, the train makes the curve okay, no one is killed, no molten phenol explodes or oozes or whatever molten phenol does, and then the train gains speed again. Here, I thought, was where there would be the Moment Of Intense Suspsense where the train is stopped just inches from slamming smack into the children’s field trip train (or whatever), but nothing of the sort happens. Will gets into the cab, slows the train, and stops it. Everything is fine. We learn who gets fired, who gets promoted and that the fat guy who caused it all now flips burgers and gets fries with that.

See this one if you want to–it’s not a complete failure, and the actors are very good looking–but you know, of course, that HP7.1 is coming out in a few days. You might as well wait for that one.

(My kids won’t see it. There’s  a little language and a couple of inappropriate conversations, but nothing really awful.)

One thought on “UNSTOPPABLE, starring Denzel Washington and Chris Pine”