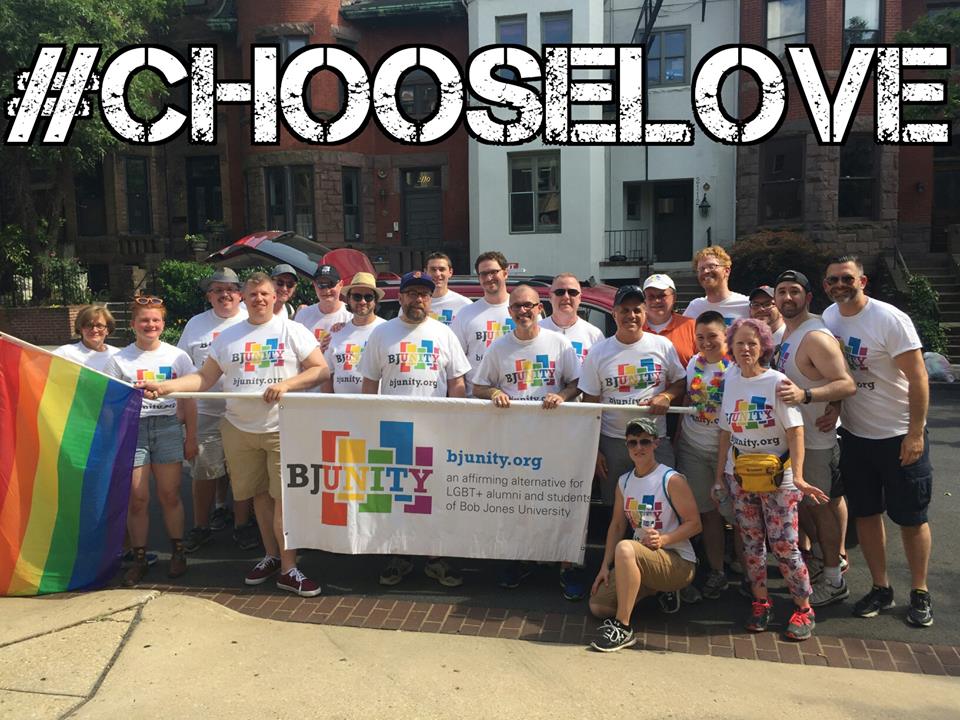 You are not alone.

Yes, I’m talking to you. Hiding in your dorm. Lurking over at Starbucks. I see you in all your beautiful gayness, queerness, transness, or whateverness that makes you the wonderful person you are. I know you’re wondering if you can be gay and still love Jesus. You can. A great cloud of believing gay witnesses cheers you on, especially next week as you walk around the Bob Jones University campus during the “Sex, Gender and the Church” conference, wondering whether your L or G or B or T or Q or I is obvious to everyone and whether you’ll fall apart at the seams if you have to go through much more of this.

You are not alone this week when the arrows of Scripture and Culture have been sharpened and aimed at you. You’re right. You’re standing there, and they are aiming, but you are not alone. We are here. We stand with you.

We want you to know that when you were formed in your mother’s womb, you were gay. You have always been gay or bi or trans or a- or whatever you are that makes you you, try as you might to change your orientation to straight or your gender identity to your assigned birth gender. You may have tried over and over to fix yourself. You couldn’t. Not because you’re weak or sinful, but because you aren’t broken. There’s nothing to fix.

As a Fundamentalist, you might not be aware that there are helpful books by LGBT Christians that will help you in your growth toward wholeness and authenticity. When you are safe and have time, read this book and this book and this book by Christians about gayness. Read and realize that you’re not the first person to walk this path. Others have come before you. You are not alone.

The truth is there are a lot of gay people in the BJU world. Students, faculty, staff, alumni. It’s no secret, for example, that a number of BJU administrators have gay children. Tweak the settings on your gaydar and look around. You’re not stupid. You’re not blind. And you’re not alone.

But wait, you say, those people my gaydar has homed in on aren’t Actually Gay. They are “struggling” with same-sex attraction. That’s called being gay. If you’re a girl and you are same-sex attracted to other girls, you’re gay. If you’re a boy and you get the hots for your roomie, you’re gay. If you’re also interested in “Opposite Marriage” (otherwise known as “Traditional,” though it’s far from traditional if you get right down to it, historically speaking), you may be bisexual. Bisexuality is a thing, lots of people go there, and you might be one of them.

I wasn’t always an affirming ally. In my time, I’ve done a lot of “Gay People Are Rebelling Against God” and “You’re Not Really Gay, You’re Just Trying to Hurt Your Parents” and “Don’t Run Like a Girl,” and even, “You Can’t be Gay and Saved,” but the time came when I could no longer simply repeat what I’d been taught in Fundamentalism. I was a grown adult, a mother, a teacher, a lawyer, and I simply had to educate myself. I had to learn. I had to reach out to people who had walked this path. I found gay Christians and gay former Christians who were gracious enough to share their stories with me. I discovered BJUnity. I listened. I learned. I changed my mind. People in your life may eventually change too. Hope and pray for that while moving forward with your life.

It’s particularly hard now, because you’re a student or an employee of BJU, but the day may come when you realize that the people teaching you are, by and large, academically incestuous (BJU grads taught by BJU grads taught by BJU grads), and the people running the place are scraping the bottom of the ultraconservative barrel to find enough paying students to keep the lights on. Most Fundy colleges have closed up shop, and BJU’s enrollment has been in steady decline for many years. Conferences like the one you’re suffering through now, are efforts to market the school to whatever demographic is left that might think, “You’re right, I need to keep my kids away from gay people for four more years.” The problem this demographic faces is that today’s young people have opened their hearts to their gay friends, and because of this I’m confident you are among the very last gay people who need to hide their authentic selves. People are coming around.

Which is not to say that BJU as an entity will ever become affirming or even tolerant of gay people. Because of this, never EVER out yourself at BJU to anyone, but if you do, possibly because someone guilts you into “honesty” or “openness” or “accountability,” let it be a trusted friend, not ever a member of the Administration, who, although their own children, or their friend’s children are gay, will out you to your family, your home church, and then, in “love” and “Christian charity” expel you.

They’ll ship you, possibly days before final exams, possibly without any warning, leaving you with no credits, but all your student loan debt. On your way off campus, they’ll make sure you hear them when they call your orientation sin and abomination and corruption and perversion, but you are not broken. You are fine. You are who you are, and that is okay. Things are going to get better. You will not long be in an atmosphere that stifles your expression, others your identity and condemns your biology. You’re going to make decisions that are in your own best interest as a functioning adult in American society. BJU is a byway on your journey to adulthood and independence. It is not your destination. It is not your life’s template for godliness.

Don’t put yourself in a situation that leaves you without food- or housing-security. Living in the dorm and eating in the Dining Common are probably better than being outed to your family, shunned by your church, and crashing at a shelter. Closets are small and dark, but they can also be cozy and safe. It’s not wrong to be closeted. You don’t OWE other gay people your story or your honesty right now. Later you can go there. Later you can be loud and proud and no one will hurt you. (By the way, sit for a moment and ask yourself why you are at a college that frightens you into obedience with threats of expulsion. Just sit there. Just ask that.)

When someone at school asks you “Are you gay?” or “Do you struggle with same-sex attraction,” feel free to say, “Gurl, no way!” or “Of course not, Mr. Jones. Why do you ask?” It isn’t lying if you’re hiding Jews in the attic, and you, my friend, are fine and fabulous if you need to hide yourself in order to be safe.

They aren’t going to say that, are they? No, probably not. But be aware that the people who are making your life so difficult right now are not important people. If you’re a legacy student, you may have grown up hearing their names. You may have come to think they are Somebodies. But they aren’t. They are nobodies, just like the rest of us. They are employees at a small (and getting smaller by the year) increasingly irrelevant school you happened to stumble into for whatever reason. You can leave at any time. Get a job, get an apartment, and go to Greenville Tech. Or just go home. No one can keep you at BJU against your will. The people telling you to stay and to have sexual feelings you don’t have (but heavens! don’t act on those feelings!) are underpaid, overworked teachers and administrators who somehow acquired the entitled notion that it’s their right and duty to tell you that God can’t love you or save you if you finally—after years of praying and anguishing about it, and maybe even submitting to barbaric “treatments”—give in and say, “That’s it. I’m gay. I am so very very gay.” On the other hand (see above), don’t leave if it would put you in a position of being without food- or housing-security. Right now, that’s probably more important to you. Don’t put yourself in danger.

Until you can leave (when you graduate or sooner), know that you are not alone. BJUnity (see below for our contact info and mission statement) is here in compassion and outreach. We can help with counseling. We can put you in touch with those who have gone before you who now live authentically, joyfully as Christians (or not) in the big wide beautiful world. Your communication with us will be private, confidential. Unlike Jim Berg, who “wasn’t aware” that he should keep sexual abuse survivors’ information private, we are careful to do so. Your time at BJU is short. A few years at the longest. Be safe. Be closeted. Until you are ready. And then, my friend, BE YOU.

(And here’s a note to those of you who are reading this who aren’t gay, and who are struggling with whether you should affirm your gay kid: Affirm them. Love them. Reach out to BJUnity–read the testimonies there. Consider. Think. Jesus is not going to send you to hell for reading. The ground will not open up under you for taking a long, considered look at the books mentioned above. Take a breath. Open your heart.)

If you need us, we’re here.

BJUnity confronts homophobia and transphobia in compassion, dignity and love, with the objective to promote dialogue and change.