Everest is the true story of a tragic 1996 climb that resulted in the deaths of several hikers. There is beautiful scenery and there are touching emotional interactions. There is that most important feature of a really good story: self-sacrifice. There is suspense, moments of fright, deep sadness.

You can’t help, when watching this movie, to wonder what your “Everest” should be or could be. What is that thing you absolutely must do to make your life full? The tippy-top of your To-Do List. The thing that, were you to fail to do it, you would regret most.

Maybe there is nothing you think of like this, but perhaps there is. My husband wants to hike the Pacific Crest Trail. He’s been talking about it for many years. He needs to do that. Climbing mountains and taking long hikes aren’t my cup of tea. Instead, I did law school and passed the California Bar Exam. I needed to do that.

Maybe there’s something you should do.
Do that.

You also can’t avoid the question posed by this movie, “How cold is too cold?” It is asked in every possible way: How far is too far, how painful is too painful, how little oxygen is too little oxygen, how close to death and/or divorce can you get without imploding, and so on. It’s not just a question for adrenaline junkies and “because it’s there” folks. It’s a question we can ask about all sorts of things.

Because, you know, climbing Everest is a loony-tunes thing to do. The mountain is trying its darndest to kill you, so you’d better have a really good reason for attempting to walk brazenly up its forbidding faces, scramble over its glaciers, and push forward into its crevices just so you can touch its summit and plant your little flag there.

I’m just saying, when you pick that thing you want to do (and I’d say you don’t really pick such a thing: it picks you and shakes you around until you can’t do anything else than make the attempt), be sure it’s worth it. Count the cost. Check with the people who matter to you (not necessarily the same as the people to whom you matter). Then strap on your gear and jump out of the plane, apply to the CIA, enroll in ROTC, take up the oboe, tell everyone off because you are too going to be a stay-at-home-dad and damn the torpedoes, or cut off the toxic people in your life. Take up skateboarding. Take up culinary school. Take up politics. Heck, take up mountain climbing.

But remember the simple lessons brought to you by this movie:

1. Check the weather. Storms may loom.
2. Keep your communication lines open.
3. Be ready to turn around 100 yards from your goal if it means the difference between living and dying.
4. Before you decide not to turn around, remember there are people who love you and want you alive.
5. Thank the Sherpas. They went ahead of you to stash the oxygen tanks and secure the ropes and ladders that made your attempt possible.

I don’t think I have to spell out for you who the Sherpas in your life are. You’re smart enough to know who they are. Thank them. They are the ones who deserve the applause. 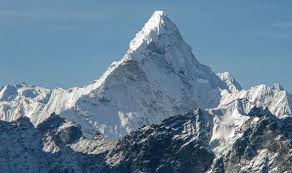