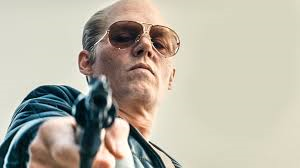 The Departed, under the direction of Martin Scorsese, gave us a fictional look at the life and violent times of James “Whitey” Bulger, crime kingpin in South Boston in the 70s and 80s. That movie, though deeply disturbing, distances the audience from Bulger’s crimes simply because it is a “based on” story.

Black Mass, on the other hand, is fact-based. This is what happened. These are the people Bulger killed. This is the culpability of Bulger, of the FBI, of everyone who looked the other way, pretended not to see, ignored, passed by, or straight up refused to talk.

This is a movie that grabs your chin in its hand and says, “Look at me. Reflect that this actually happened.” Children were made into drug addicts. Personal disagreements led to executions. Government employees were complicit in the expansive evil.

Johnny Depp is superb as Bulger. Ruthless, barbaric. I hope he gets an Oscar nomination for this work.

Benedict Cumberbatch plays Bulger’s brother, Senator William Bulger, but somehow it’s not distracting. Turns out (at least for me) it’s Cumberbatch’s British accent that kills the ladies. When he speaks with the same dulcet tones, but in “American,” he’s just an actor. (Good thing Khan Noonien Singh spoke Brit, amirite?)

Not for children. Language and brutality throughout.

AN ASIDE REGARDING SCRUPLES

Definitely, however, for adults everywhere. I hear often from people who have scruples against seeing R-rated movies, and I’d like to take this opportunity to address this.

The scripture verses most often offered in connection with such scruples are (1) “I will set no wicked thing before mine eyes,” and (2) “whatsoever things are lovely . . . think on these things.”

Let’s speak to (1) first:
I don’t know what King David is particularly considering when he says this, but it isn’t violence or brutality. King David is known in the Bible as a man of war. He did violence on the daily for years, and the Bible speaks of him as a man after God’s own heart. Lots of soldier’s language and strewn body parts in King David’s world. So the wicked things he’s avoiding looking at in the above-mentioned verse are not violence and war.

(2):
Whatsoever things are honest and lovely and pure cannot mean we are only to sit primly thinking about roses and kittens, lambs in springtime. If we did that, George Muller wouldn’t have delved into poverty and filth to raise orphans. Prison ministries would not exist. You could never grapple with any serious moral issue in any meaningful way.

So, I conclude that these phrases must mean something else than “don’t look at disturbing images” and “don’t think about profoundly violent things.” I’m not going to attempt to preach to you what these passages might mean, only to say that they can’t mean what they can’t mean.

Back to Black Mass, I don’t care if you see it or not–it’s just a movie–but it’s a window into our country’s history, a story of what happens when might is right and the law slinks away in fear and self-seeking. We need to look at real people in real situations doing real things. We need to see the world as it is. Avoiding raw stories, ignoring harsh reality, doesn’t preserve one’s moral or mental purity–it merely advances one’s ignorance of society. These stories are rated R so that young children are not exposed to the brutality, not to protect adults from important knowledge and societal understanding.

Evaluating a film for adult consumption can be tricky. Some people are so disturbed by the F-word, they can’t focus on the story, so they miss a lot of great story-telling. Some people are morally disturbed by graphic sexuality or even not-so-graphic sexuality, so they will miss some great stories. All I’m saying here is that if you are an adult, you should be able to consider adult themes, adult conversations, adult situations without freaking out. You should be able to see, for example, Shawshank Redemption, for the friendship, self-sacrifice, grace, heartache, joy, and victory, that is displayed within the stark setting of a prison wardened by a religious freak and staffed by criminally-brutal officers, without reacting like a fourteen-year-old.

You should be able to see The Departed for the beauty of the direction, the script, and the general man-candy (DiCaprio, Damon, Wahlburg) and for what it says about humanity, with an eye to reflection on our shared condition: our hopes, dreams, failures, betrayals, without believing you’ve failed God for watching it because of the various “fucks” it contains. (Pretty sure God doesn’t cringe and hide when He hears this word.)

If you are a grown-up and you want to limit yourself to Disney flicks, that’s your prerogative, of course. I don’t care what you watch. But I would be pleased if sometime, when you have leisure and nothing else to do, that you try something less macaroni-and-cheese and more intellectually sophisticated that might make you consider your place in the world, how others live, and the tragedy that people in America live and die, having spent their whole lives in hunger and fear, poverty and ignorance, and that, in that condition, often, people give love and are loved in return, as are a couple of sweet women in this movie.

Please stay for the first part of the credits. Simple gripping images put a stamp on the real-ness of the story.