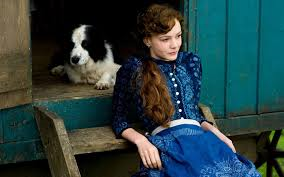 Based on the 1875 novel by Thomas Hardy, Far From the Madding Crowd was, as you might suspect, attended by me and four other middle-aged women, all of whom reeked of English degrees and irrelevancy. Still, there was much to be learned from this movie. Too bad the people who need to learn from it probably won’t see it.

To wit: young single women (who should already know all the below things from seeing, as I keep urging you to do, He’s Not That Into You, a must-see).

Because young single women won’t see this, I offer a short list of insights to save them from lives of misery and what-ifs.

1. Don’t marry a man because of how handsome he is in his military uniform. You should have learned this from the Lydia Bennett-George Wickham disaster, but you didn’t. Because you think your soldier is different, and no one understand him like you do, and isn’t he handsome? Yes, he’s handsome, and probably no one understands him they way you–you mature thing, you–do, but don’t marry him because of the uniform. Lots of people have these uniforms, and most of them are not for you, dear.

2. Don’t marry a man because when he kisses you, you get that melty feeling inside. That is the feeling that accompanies kissing, so don’t imagine that just because you get that feeling from this particular hunk o’ man that he is the man whose last name you should now suddenly practice signing as your own future surname. This particular feeling will present itself again and again with each new person you kiss. Don’t base your life decisions on this particular biological response.

3. If you have made decisions based on 1 and 2 above and now realize that these decisions were wrong and not in your best longterm interest, disentangle yourself and move along. The sooner the better. It’s hard at first, but it gets easier.

4. Don’t lead a gentleman on because you don’t want to hurt his feelings by rejecting him right away. Do the rejecting and get it over with. You know he would have no such qualms about rejecting you, so return the favor. If you lead him on by saying, “I’ll answer your proposal by Christmas,” you might find out that he thinks your are engaged and start doing all kinds of creepy stalky stuff like having things engraved with your first name and his last name, ala how creepy you were in #2 above by practicing the hoped-for signature. At least you could crumple the paper up so no one would see, though, so you are better than he is with all his obvious stalkiness on display.

5. If you are the proposer, and your proposee says, “I’ll let you know by Christmas,” this means no. Unless it’s Christmas Eve around 11:58 p.m. and his/her eyes are shining with joy. If someone has to think about it for several months, you should probably (a) not get your hopes up, (b) not want to marry him or her anymore, (c) and definitely not get stuff engraved. The answer you were looking for was, “Yes! Of Course I will!” and anything other than/less than that is not a yes. At least not the kind you want to go through life with.

6. If, before any of this happens, you meet the kindest, most handsome man on the planet, who adores you and begs for your hand, MARRY THAT ONE. Especially if he is a shepherd in the English countryside. Don’t wait around for the plot to thicken and bubble and explode in all that fire and abuse and stalking and death.

7. Don’t think that if you break these very wise rules, you will eventually get out of all your trouble and end up with The Gorgeous Hardworking Farmer, because likely you won’t. You’ll be stuck in some horrible relationship you can’t get out of because of custody or finances or family pressure. Do it right the first time if at all possible.

8. Having not done it right the first time, I offer these suggestions as observations, rather than rules, with enormous gratitude that I was able to escape when escape was necessary and able to move along when moving along was required and blessed with a second chance at great happiness, comfort, and peace, which I know not everyone gets.