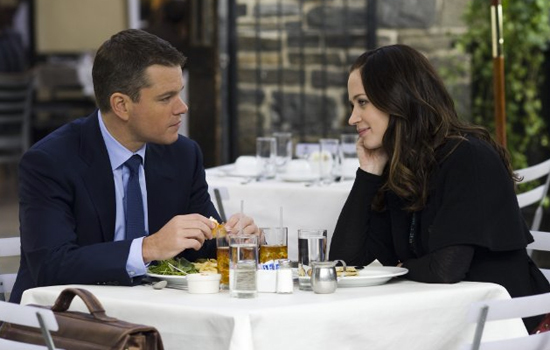 Oh, delirious joy! I get to write about Matt Damon and Predestination at the same time! I am over the moon. I just won the Calvinistic Woman’s Lottery!

The Adjustment Bureau is about a God with a plan that’s not really a plan, a God who not only isn’t sovereign, but has angels who can’t seem to get it right half the time. They all work out of an office in Lower Manhattan. It has a neat view of Central Park.

Now, in Christian-land, it’s the people who carry around a book to teach them how to live, but in the world of the Adjustment Bureau, it’s the Adjusters who carry around a book. It has an internal GPS locater-function (very reminiscent of Harry’s Marauder’s Map) that has flashing spots so the Adjusters can track their subjects, the people whose lives have gotten off-track and who therefore need practical life-tweaks. The Adjusters look like normal people, except that they wear fedoras. That should’ve tipped people off right away, since no one has worn a fedora since my grandfather’s time, unless you count Jack Abramoff, and he went to jail.

The Adjusters’ mind powers don’t work so great in the rain or when the subjects are surrounded by a lot of water. This should be a great marketing device for Residensea or that floating Condo Island I heard about on the radio last week, which really, is nothing more than Residensea for people who are uncomfortable with oceans and want to stick to rivers in America. No one blames them. If nothing else, the pirate danger should be a little lower.

Story: David Norris (Mr. Damon) is a member of the United States House of Representatives, running for Senate. He is roundly defeated, and so goes into the hotel bathroom to practice his concession speech. It’s a very nice bathroom—the stall doors go all the way to the floor and they are made of wood.  He practices said speech and then Elise (Ms. Blunt) comes out of a stall and it’s boy-meets-girl super-chemistry time. I mean it, these two are great together and I hope they make a bunch of movies.

Here come the Adjusters. This match used to be made in Heaven. David and Elise are so wonderful together because they were Meant to be together. But something changed in the eternal plan and now they must not get together whatever the cost! The reason David and Elise can’t be together is that if they do get together, David will be fulfilled (she’s the perfect woman for him). He won’t have this aching emptiness that causes him to need the applause of massive, cheering crowds. Therefore he won’t run for President of the United States, and if he doesn’t run for President of the United States and actually become President of the United States (hold on to your armrests, because this is going to scare you), the correct environmental regulations will not be implemented and the world will come to an end. Oh, and also, if David marries Elise, she won’t become an internationally-known choreographer, which seems a little less important to me, but didn’t seem less important to David. I mean, he was willing to give up the Planet’s Future Existence to be with her, but not her chosen career path—now that was important.

Enter the Unfaithful Angel. His name is Harry and he’s black. I’m only pointing that out because you expect Illuminati/Bergerbilder types to be Caucasian, I don’t know why, and anyway, it’s time worldwide conspiracies were more inclusive.

So it’s really true love of the kind Viola DeLessups dreams in that scene where the nurse gives her a paint brush to clean her teeth. The kind that overthrows kingdoms, or rather, frustrates God—or, “The Chairman,” as they call him. Guess what? He works “upstairs.”

The problem the Chairman has, is that he isn’t sovereign. And if you whine long enough, he realizes that you were right all along and he’ll actually change the plan for you. It’s fascinating that the Chairman who previously was interested in saving the world from environmental catastrophe is now not so into that, and is more into true love and hang the Earth.  True love’s kiss is truly magical here.

I kept thinking throughout that this movie is how a young child would see God’s plan if the child had been the victim of extremely poor theological training, so that God is a sort of Cosmic CEO and his angelic helpers are not so much ministering spirits as they are fixer-uppers who wear suits and go around with memory zappers  a la Agent K on Men in Black. It would not be surprising if a child had thought this up, considering that a lot of children’s theological training includes fresh vegetables acting out Bible dramas. (My own opinion of Veggie Tales is that their creators must have gotten inspiration from Dustin Hoffman in Tootsie, when he says: “I did an endive salad that knocked the critics on their ass!”  He says it with such passion it’s no wonder the idea of animate vegetables got taken up by others.)

Finally—and it’s quite dramatic—David convinces Elise that something supernatural is going on. He has learned to navigate the substrata of Manhattan, that is, doors that lead from one place to another place not actually adjacent. That is, you can open a door in  Yankee Stadium and be on Liberty Island. How David knows that the door underneath the Statue of Liberty is the door that will lead to The Chairman is unknown. There is no nameplate on that door.

Oh—hahahaha—guess how the Adjusters navigate these portkeys…I mean, these doors? (SPOILER SPOILER SPOILER SPOILER alert, don’t say I didn’t warn  you. If you read on, you will wreck the funniest part of the movie for yourself. STOP STOP STOP) It’s the hats.  Without the hats, they can’t do the magic, which gives new meaning to that cryptic passage we have all gone angsty about at least once: “…because of the angels.”

So, the movie is funny, it’s sweet, it’s got a lot of drama and suspense. As a story of true love, I’m in.

But I don’t think it was meant to be about true love. I think it’s meant to be a mockery of religion, but it’s a straw man. That is, they’ve put up a Picture of Predestination (“You don’t really have free will, you have only the appearance of free will,” etc.) that is nonsensical and then they knock it down. They create a God who is fallible, impotent, and frustratable and make him bend to the whims of his creatures. Then they say, “See, Predestination is a bunch of hooey and God is a myth.”

Well, yeah, when you make it about Angels who have to erase your brain if they happen to mess up and not spill coffee on you at the right time, sure.  They have a man fall in love with a woman who is completely and perfectly right for him on every possible level—who will complete him—and then they say, “No, it’s not Chairman’s plan,” so that we’re rooting against God from the beginning of the movie and then we are relieved when he gives in and lets David and Elise be together.

This isn’t a mockery of the Living God. It’s a mockery of an atheist or agnostic or generic unbeliever’s caricature of God. I mean no offense to the writer, as the script is quite nice, with only a couple of distractions, chiefly the bit about the hats. Certainly it’s hard to write a tight screenplay, especially one that works in two overlapping realms, and this one is pretty good. But it isn’t about God.

The Living God is in control. He controls His World. He controls everything that happens. He has a Plan that has a beginning, a middle, and an end. He isn’t surprised by anything. He doesn’t have to take things into account. He doesn’t have a army of angels going around fixing up glitches. He doesn’t gain knowledge. He doesn’t look down corridors of time. He doesn’t erase the plan, adjust the plan as time goes on. He doesn’t play catch-up. Chance doesn’t knock him for a loop.

The Chairman is frustrated when Chance intervenes. He is surprised and unhappy when things aren’t going his way. And so forth. The usual noises are made about “The Chairman is known by his or her other names” and the Adjusters admit they are sometimes known as angels. They don’t tell us why they can’t hear in the rain or when their subjects are surrounded by water, but we know—it’s so there’s a safe place for the secret talking to go on. It’s just made up so the plot doesn’t fall apart.

Another way in which the plot could have fallen apart (and would have in the real world) is that David loses Elise’s phone number and therefore can’t get in touch with her. But—hello!—he’s a well-known former Congressman who gets shout-outs on the street and whose new employment is featured on the news. The youngest schoolchild could have Wiki’d him in fifteen seconds. I know I would have if I’d been Elise. Seriously, a single Congressman as cute as this? Are you kidding me you wouldn’t try at least once, even if you had seen He’s Not That Into You (Which you should, young lady, and not tomorrow.) and therefore knew that if he doesn’t call, it’s because he doesn’t want to.

The more I talk about this movie, the sillier it gets, the more what I thought was complexity dissolves into inanity. I actually liked this movie while watching it, now not so much.

I have been in love with Matt Damon since Good Will Hunting and Emily Blunt since Prada, in which she is perfect, although I skipped her latest Gulliver’s Travels, not being a masochist.

Don’t take kids to this, even if they’re catechized: there’s one scene that’s a bit too graphic.

Funny enough, I think an atheist would also not like this movie and for the same reason: it’s too easy for a Believer to say, “Well, God isn’t like that. He actually loves the world and the people in it. He’s not a loser who sits upstairs and works through incompetent angels who fall asleep on the job in Central Park.”  God who sent His SON to die! has no connection whatever to the impotent Chairman, who is more concerned with the Earth than with the people on it, who doesn’t live enthroned in Heaven, but rather has offices in New York City (albeit seriously nice digs), and who doesn’t make an appearance, but if he did, he would certainly be an old man with a beard who can’t hear very well but spends his time rubbing his hands together anxiously, hoping everything all works out in the end.