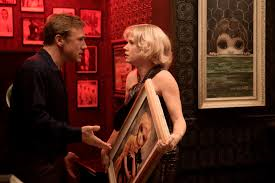 I know it’s shameful how many movies I’ve liked recently, since I usually hate everything. Blame it on the Oscar-baiting which occurs every year at this time. Oscar-baiting is the bizarre view that the good folks at the Academy of Motion Picture Arts and Sciences, when culling through all the year’s work, like the most recent stuff best. As if they think, “Wow, I can’t remember Belle, because May was so long ago.”

In any event, we, the viewing public, get a holiday bonanza because of this squishing of all the good stuff into late December. Therefore, I’m liking a lot of movies these days. Or perhaps I’ve just gone soft.

(Even the trailers are amazing this time of year. The Homesman trailer brought me to tears, as did the trailer for The Good Lie. The trailer for The Woman in Gold made me angry to the point of words under my breath, and The Second Best Exotic Marigold Hotel trailer made me laugh out loud with simple happiness. We’ve all been extremely disappointed by movies that fail to live up to their trailers–there are uncountable examples of this–but I am hoping for the best with all these, especially The Homesman, which stars Tommy Lee Jones and Hilary Swank. Watch all these trailers on youtube immediately, please. I’m not making them clickable here, because then you’ll go away and never come back to read my review.)

Whatever the answer, I loved Big Eyes, the true story of a woman who loves a man and a man who loves himself and wants everyone else to love him too. In his quest for love, riches, and fame, he tosses away truth as if there is no value to it, and certainly no value above his need to be paid and adored.

It’s the 1960s, and Walter Keane is a widely-admired painter of children with big eyes. Haunting, if simple, paintings of children who seem beat-down, emotionally starved. Walter grows famous and rich off these paintings, the prints and postcards of which become ubiquitous. But there’s a secret. There’s a hidden truth. Big Eyes is the story of that truth, the lies which surround it, and the inevitable conclusion, because of course, truth will out sooner or later, not always quietly.

Big Eyes is instructive, perhaps even healing, for anyone who has been in a difficult relationship, particularly one in which a partner seems charming and magnetic in public, but at home is controlling and cruel. It may be even more instructive if you haven’t experienced that type of relationship, but have a friend who complains about a relationship, and you can’t figure out why–his or her spouse or partner seems so nice, whatever could be wrong, you must be exaggerating.

Amy Adams as Margaret Keane is wonderful, as is Christoph Waltz as the charismatic-then-tyrranical husband/artist. Amy Adams can play anything, of course, and Christoph Waltz is magical in every role he undertakes. This one is very near the top, though it’s hard to pick this role over his dentist in Django or his Nazi in Inglourious Basterds, but perhaps only because here he’s wearing ordinary clothes and not blowing people up or getting swastikas carved into his head.

It’s not necessary to see this one on the big screen, so if your movie time and/or budget is running thin because of Imitation Game and Theory of Everything, and you’re looking forward to Selma and American Sniper, you can wait for this one to come out on DVD or streaming.

Definitely a great movie for girlfriends of any age to attend so they can say bad things about Mr. Keane and throw popcorn at him and then go out after and talk about all the awful men they’ve interacted with. That sounds like manhate, but it could also be quite the catharsis. If you want to go out and talk about women who are awful, you’ll have to pick another movie, as Big Eyes is definitely a “Go Girl” show.