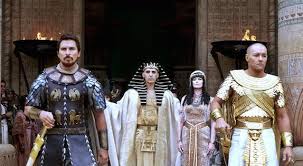 Rotten Tomatoes doesn’t like this movie, but I did. It’s the story of Moses and Pharaoh, the Ten Plagues, Passover, and the crossing of the Red Sea. There are wonderful visuals of the cities of Egypt and the Hebrew slaves slaving to build said cities.

The story follows the Bible narrative, with some startling departures. God is not depicted as you expect. You don’t expect God to be depicted at all, really, but there he is. I asked my sons about this and one said, “God can show himself however he wants,” and I suppose this is true. Moses also doesn’t stay in the desert for 40 years. He’s there 9 years. I can overlook this, but lots of people won’t.

I enjoyed the slow pace of the movie–the plagues don’t start for a long, long time, and when they start they go fast.

There’s this beautiful little baby whom Pharaoh loves, and when you see Pharaoh’s father-love for this little boy, your own heart hurts because you know what’s coming. The Tenth Plague (thankfully, no green fog attends) moves slowly and sadly and your heart hurts for the poor Egyptians who after all had no say in the matter.

And couldn’t God have freed his people some other, less violent, way? I don’t know. I can say that I didn’t like all the violence, all the plagues. I’d never before thought of the ordinary Egyptians losing their livelihoods, their beloved animals, being eaten up by flies and boils, being beaten up by hail, seeing their hard-worked crops devoured by locusts.

Pharaoh is a sympathetic character. I liked him a lot and wanted him to survive. My heart hurt for him in his losses, his confusion, his desire to be a good king and father.

Moses was well played. He’s a strong and able man who wants to do the right thing in the right way and isn’t sure God knows what he’s doing. God straightens him up on that, and in the end, Moses believes.

I was excited to see that Aaron Paul of Breaking Bad was playing Joshua. Alas, he has a couple of decent lines and a few one- or two-word answers. Not sure this adds to his resume at all. He needs a real part. We know he can play it.

In sum, the large outlines of the story are intact, and there are some major departures (I didn’t list them all here). I will say that this movie has more Bible in it and more about redemption in it than any of the so-called “Christian” movies I’ve forced myself to see lately.

I explained all that to my kids and we all went. They enjoyed it, as did I.

In fact, I don’t want to hear any complaining about the little boy or the crocodiles or the lack of Gershom’s circumcision when there’s drivel out there like Left Behind being touted as “Christian.”