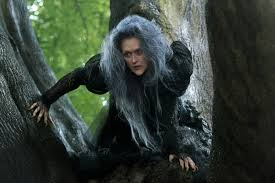 Call me ridiculous, but I didn’t know Into the Woods was a musical. And not a musical like The Sound of Music where people do a lot of talking and then burst into songs about raindrops, kittens, and copper kettles, but the kind where people are singing all the time about everything.

Mrs. Baker wants a baby. There’s a decent and reasonable explanation why she can’t have one, but there is one way. A woman who wants a baby will do what it takes, especially if there’s only this one time. Only one chance.

Mrs. Jacksmom is starving. She needs food. Cinderella needs a prince. Prince Charming needs a bride. Rapunzel needs her freedom. The Wolf needs a meal. Red Riding Hood needs a grandma. And so on.

But the Witch (Ms. Streep) needs herself back. That’s controlling here. Everything that is done is done at her bidding and for that reason, although the other people have their own reasons for what they do. Their own wishes.

Dreams come true (Chris Pine as Prince Charming is a dream come true, right?). Some people don’t make it. The duet of Prince Charming and Rapunzel’s Prince is worth the price of admission. It’s hilarious, if far too short.