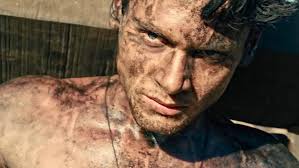 It is also the story of human resilience, perseverance, and downright guts. One is faced with the question of how much one man can endure and how sadistic another man can be in finding out the limits of his opponent’s strength.

It also answers definitively (not that it is asked in the movie, but you can’t help but thinking this) the question often posed about Jews imprisoned by Nazis: “Why didn’t they revolt?” I can’t tell you how many times I’ve heard this over the years–as if unarmed civilians carrying their babies and/or starving to death are generally able to overpower armed young men in their prime and in their phalanxes. The answer given in this movie is: if trained American soldiers stood at attention and took unconscionable brutality in the course of their captivity without revolting, then such a revolt is quite obviously–and please don’t ask again–impossible.

Directed by Angelina Jolie, this movie is another in the long line of good dramas about WWII, may they continue to roll off the presses so that we never ever forget. It suffers from being in theaters in company with The Theory of Everything and The Imitation Game. If you can only see a movie or two this holiday season, both of those are better stories with better actors than Unbroken has. And, if you can only see one WWII movie from the Jolie-Pitts this year, definitely see Fury because it’s way better–but don’t take your kids to that one if they or you are uncomfortable with ordinary *#%@ing soldier-talk.

All that said, it’s a good movie. You’ll like it, and kids over ten or so with some understanding of the War will benefit from seeing it. You can talk about courage and suffering and protecting your friends and not throwing blood into the water and how-could-these-men-be-so-brave-because-I-would-immediately-break-into-tiny-pieces.

(Caveat, because there are horrible parents out there who say things like, “Look, Mr. Zamperini could stand up to the Japanese prison guards who were torturing him. Can’t you at least put up with a few bullies?” Because no. If your kid is getting bullied, get it fixed or haul him out of that horrible school with the administratively impotent principal.)

Rotten Tomatoes gives it 51% (green splat), and that’s probably because it’s not tense or suspenseful, just brutal. The flashbacks to the 1936 Berlin Olympics are nice. There’s really no need to see this one on the big screen; it’s okay to wait for the DVD or streaming versions.