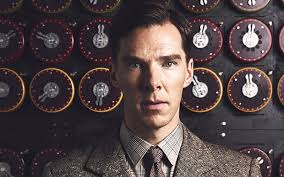 In a movie which could have been subtitled “in which a gay man saves over ten million lives and takes two years off the life of Adolph Hitler”, Benedict Cumberbatch gives a stunning performance as the great British mathematician Alan Turing. Not far behind him is Keira Knightley as Joan Clarke, a fellow math wizard and code breaker at the Brits’ famous cipher center at Bletchley Park.

Their task, and that of their team of proto-geeks, is to break the Nazis’ “unbreakable code” using a captured “Enigma” machine, on which the code changes daily. While they toil to find the solution to the seemingly impossible problem, Allied soldiers die in the field, Londoners perish under buildings in night bombings, Royal Navy ships are sunk. As you suspect, whole-hearted determination, almost preternatural brain power, the Treasury of England, and a little bit of luck combine to prevail over the code, over the Nazis.

And therein lies the question of right and wrong, good and evil. Is it right to demean, arrest, demonize, humiliate, and internally mutilate a man who breaks the back of Nazi Germany, simply because he is gay? Obviously not. Obviously Alan Turing should have had parades in his honor (alas for the clandestine services, there are never parades), a knighthood at the very least. Too bad he was gay. Too bad that negated all the good he had done. Too bad QE2 didn’t pardon him for his gay behavior until 2013. Twenty-thirteen! It’s beyond comprehension, but at least it was finally done.

The moral(s) of this movie, which you should definitely see–it is smart, funny, somber, victorious, deeply moving, plus Churchill is mentioned (I love him lots)–is (are) that it takes immense effort to overcome evil, that such overcoming doesn’t necessarily happen the moment you put your heart and mind into it, and that even then, maybe no one will notice, and you have to continue to live authentically as yourself. So do that.

And for those of you still mired in a world where you can’t look a gay person in the eye and ask how his or her day went, how his or her partner is doing, it is time to stop that and show respect for humanity, for people’s work, for people in general who aren’t doing anything else than wishing you well and trying to live their own lives. Plus maybe–you don’t know–maybe they are saving yours.