Below Sea Level is a documentary about the lives of some of the residents of Slab City, an abandoned military installation in the Southern California desert. You can watch it here.

As you drive up to Slab City, you are struck with the emptiness of this place. A few RVs, a couple of broken down cars, some tents, strewn around in the vastness of the unending California desert. It seems peaceful and calm. A haven for overworked souls who want to get away from the noise of the city.

But then you meet a few of these people and you are gripped with the soul-deep sorrow that leads a person to find himself out in the middle of absolutely nowhere, deep in a desert far from family, home, society. What leads to this? What comes of it?

The movie is raw and graphic. We follow the lives of several people disjointed from society by heartbreak. One woman spent all she had fighting a losing custody battle. Others became “residentially challenged” for other reasons. One, “Insane Wayne,” may not be in possession of all his native faculties. He is scary to look at. Cindy is a trans woman who keeps a hair and nail salon in her trailer. Mike is a struggling song writer with no ability to sing, but a decent back-up band, “The Slabettes.” Kenny, the most articulate of the slabbers, expresses a desire to keep pushing forward into normalcy, though at the end, he seems to despair of getting out, coming to believe his projects and plans are make-work, self-imposed to make him think he’s progressing.

These are the Slabbers. Homeless, living out on the vast desert, minding their own business. Some hope to get out and back into society. One woman has an interview for a live-in situation. She’s hopeful. Others hope for long-lost family members to pick up the slack and bring them home. Some call family members to make connections, but it’s clear the people on the other end are patronizing them. Trying to get off the phone and back to their lives. I didn’t blame them. I don’t know how I’d feel if my son ended up there.

Frankly, the film is heartbreaking, and brings up more questions than it answers. Do the Slabbers want to live in-society lives or is it better for them to be separate and unnoticed? If they wanted to be integrated into society, would it be worth the bureaucratic nightmares of lines and forms and interviews and crowded public housing? Is it preferable to live essentially alone and unbothered out at the Slabs?

It’s not easy to watch this film, but I would recommend it for anyone who wants to know a little bit more about homelessness.

I was left with great uneasiness. If people drive a hundred miles out into the desert and camp there, do they want be left alone or do they want to be rescued? What would that rescue look like? Would it “stick” or would the homeless person be out at the Slabs again next year? How much does mental illness play into this, and is anyone looking to find out. 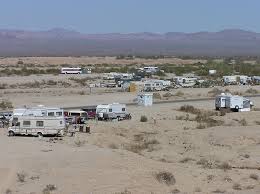