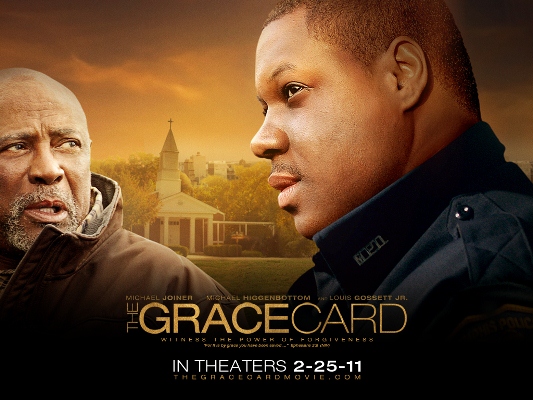 If you don’t count the fact that there is no Jesus and no cross in Grace Card, this is a Christian movie about race reconciliation, forgiveness, transformation, and emotional healing.

Grace Card is a powerful story about a family in distress because of tragic loss. It’s also about race relations in Memphis. There’s a white cop who doesn’t want to ride with a black cop, and the black cop must show love to reach out to the racist white man.

The white officer (Joiner) is a unreconstructed racist—he doesn’t even pretend he isn’t. The black officer (Higgenbottom) is a police officer only until the church he pastors is able to fully support him. The people in the church are equally offended by the idea of racial reconciliation. They want it handed to them; they do not want to work toward it. No one blames them. Why should the victims have to reach out to the oppressors? (Answer: because oppressors don’t reach out to their victims)

In the end, the reconciliation is effected by immense sacrifice by the black officer and by another black man from the dysfunctional white family’s sad history. It’s a bit corny at the end, but I did actually tear up. (There’s a fairly large medical glitch, but I won’t completely ruin it for you.)

The music is nice. The acting is about what you would expect from a non-A-list group of actors. The story line is edgy and up-to-date, addressing important issues.

But, as mentioned right up front: there’s no Jesus here.  Reminds me of that movie everyone was ga-ga over a few years ago—the one about Jim Elliot and the Auca Indians. There was no Gospel in it.  No one was transformed by the grace of Jesus Christ, and in the end the man who killed the missionaries goes to the grocery store and says, “Wow, you give them a card and they give it right back!” and there is nothing said about how, now that he believes in Jesus, he is a new creature. Here, the same lack. There’s no witness of the grace of Christ to transform a sinner into a saint, no power of the Holy Spirit to bring a man from death to life, no Father whose heart we have broken and who longs to reconcile us to Himself.