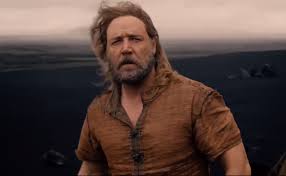 As you know, there is quite an uproar about the new movie Noah. Christians are upset and befuddled that non-Christians would make a movie that shows so much violence and hatred and cruelty surrounding the story of God’s destruction of all living things.

Before one goes all berserk over the cruel heartless Noah (played perfectly by Russell Crowe), let’s lay waste to the nonsensical way in which we Christians generally teach the Noah story to our children. We buy them plastic toys to play with and think we are providing a valuable Christian experience. Playing with a toy Ark–I know this is a hideous thought–is akin to giving children a plastic cross and a few plastic Roman soldiers and having them play the Crucifixion. The Ark was the redemption of 8 out of a billion people. We should shudder at the cost, the impact, the horror, not reduce it to a Tupperware toddler toy. 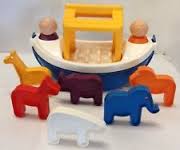 Of course children can be taught Bible stories, but please, let’s teach the stories as they are. One problem with this is that we have a bizarre corporate need to teach the entire Bible to every child before she is three or four years old.  The problem with this approach (and we all do it) is that we have to scrub the stories squeaky clean in order to make them appropriate for little ears. In doing so, we wipe the stories of the impact they would have had had we left them until the children were old enough to hear the story in its raw, natural form.

Consider Jonah. Consider Samson. Consider Jael–I remember hearing the story of Jael as a very young girl and thinking, “Wow! So cool!” But it isn’t cool, is it? It’s a story of terror and horror and murder and a shell-shocked woman with blood and brain all over her hands, i.e., not for children. 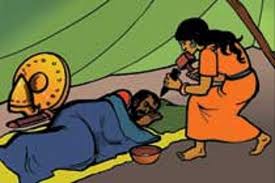 Now that we’ve established that we mess up all the stories ourselves just so our little ones won’t be traumatized and start asking questions about the violence of the Old Testament, let’s move along to Noah.

The movie has very little to do with the account found in Genesis 6-9. God does not speak to Noah; Noah has a weird dream about being in water. I have recurring watery dreams, almost all of them terrifying, but none has caused me to build anything. In the movie, however, Noah awakes from this dream determined to find his grandfather Methuselah to get Ark building advice. Methuselah lives in a cave on a green mountain that stands in the middle of a desert. He enjoys drinking tea. He understands that Noah needs to build a very large boat and that one obstacle to this plan is that there are no trees. To remedy this situation, Methuselah gives Noah a seed. Hours later, Noah plants this seed, and it immediately sprouts into a forest which Noah then cuts down for lumber to build the Ark.

Noah does not build alone. Enormous rock demons help him. Good thing they’re around, because Ham’s not really interested and Japheth is a little boy. Shem does his share, because of course Shem is the good boy. That’s why he gets the girl. Ham doesn’t get a girl. He gets to look ahead at a life of celibacy and loneliness, as does Japheth, for whom a future wife is also not provided.

Good thing Shem has a wife, too bad she’s barren–mutilated by an enemy years ago and left for dead: good thing Noah found her and brought her up with his sons.

Mrs. Noah (Jennifer Connelly) sees the idiocy of taking her 3 sons on board a ship with only one young infertile woman. That doesn’t seem smart, so she goes to see Grandpa Methuselah to ask for help. Grandpa sees the problem with the no-woman scenario and so seeks out Shem’s girlfriend (Emma Watson) and gives her a magic berry which instantly heals her. Sensing she is healed, she rushes off, throws herself on Shem and conceives.

As it turns out, she is pregnant with twin girls–win win for Japheth and Ham. Now they get to wait for their nieces to grow up enough to marry them, and I’m not sure how Shem is going to like this, being their dad and all.

The Flood comes (I’m skipping hours of this very long film). Noah and the Rock Demons use clubs to keep everyone off the Ark, because the Ark is not meant for the saving of humans, but for the saving of the animals only. Mankind is all supposed to die, including the Family Noah, which is why Noah gets all angry when he learns Mrs. Shem is preggers. He vows to kill the babies if they are girls. They are. He tries to kill them. He can’t. The Ark lands. Everyone gets off. The scene about covering Noah by walking in backward with the blanket happens. Ham leaves, because why should he stay. The end.

There are multiple moments along the way where Mrs. Noah should have stepped up to the plate and refused to go along with mean, heartless, cruel Noah. So many women need to learn this lesson–there are times and places and situations in which a woman shouting a loud and reverberating “No!” is the right answer.  That’s one good lesson from this movie. Also that ancient peoples maybe didn’t always wear flowing robes, when figuring out how to make pants isn’t all that hard. 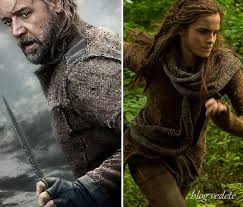