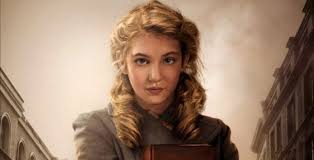 It’s about a girl named Liesel, whose mother has to give her up because the mother is a Communist. Apparently, in Germany in 1938, Communists were told, “Take your children on a train trip, give them to nice people, and then come back here and then we will arrest you and put you in concentration camps.” So that’s what happens.

Liesel shows up alone (Her brother dies on the trip because Death has taken an interest in Liesel, which is why no one she loves dies until the very end of the movie, and she lives to be 90, having married Max-the-Jew-in-the-basement who is way older than she is and having moved to an apartment overlooking Central Park, because, you know, Jews get rich and live there.) to live with a crumbly old Hans (Mr. Rush) and his wife Rosa (Emily Watson) who are taking her in for the foster care stipend, because when the Nazis take the Commie’s kids away from them, they always pay the people who take the kids in. Must be true.

Rosa (hence, “Mama”) is an old Battle-ax, as my grandfather would say, but “Papa” is the best, and calls Liesel “Your Majesty” and gives her sugar cubes, teaches her to read and write, and turns the basement into a giant chalkboard for Liesel to write words she learns. She’s very bright and learns to read and write in a year. No information is given on why she got to be 11 without these skills–Communist mothers didn’t care about education, obvously. Never read anything. Or maybe–too preoccupied with her own reading she didn’t see to the education of her own daughter, who apparently never went to school.

Rudy (the boy next door) falls in love with her the moment he sees Liesel, and wants to kiss her. She never lets him. Her pronunciation of his name is very nearly “Hoo-dee” because of that gutteral R they do over there, and it’s distracting. Also distracting is her use of “nein” and “und” (und und?) and “ja.” Pick a language, people! (“Nein, Hoodie! I won’t kiss und hug you!”)

Oddly, Neither Rudi nor Liesel grow up in the seven years we are with them. They are 11 in 1938, which would make them 18 in 1945, but they still look like little children, maybe a little taller. Perhaps nutritional issues in the Reich during this time of want. Liesel’s foster parents are very very poor–they eat watery soup mostly, but she always has pretty dresses that fit her.

Mama and Papa hide a Jewish man in the basement. When he decides he’s too much of a burden to the family, he leaves. Nothing bad happens to him or to them for keeping him.

Papa has to go off to war, even though he’s at least 60. Then he comes home. Nothing bad has happened to him.

There is no evidence that the War is going on until the scene where the local constabulary finds that a Jewish shopkeeper has been passing as Gentile. They pull him out of his shop and shove him into a car. A man with one leg goes by on his crutches. See! We showed you the bad part of the War!

At this point I was thinking, “Well, maybe for kids…” but no. I don’t want my kids to see a mediocre WWII movie about a happy little German town where nothing happens except Death starts talking when they need to move the plot along. He speaks from the Heavens. Plus, you know, they’re Nazis.

The filmmakers know we do not want to see a movie about little Nazis being happy little Nazis, so Rudi and Liesel go to the lake and shout, “I hate Hitler!” like that would happen. By this time, Rudi has been chosen for elite training–he has to report for duty “next summer”–because he runs fast. Of course, young athletic men chosen by the Nazis for “elite” training could always wait until “next summer” to start their training. In 1944. American boots are on the ground in France, Hitler is trying to get his nerve up to propose to Eva, but we’ll let you wait until you’re ready to come to training.

Skip, skip, skip, fast-forward. Death says, “And then I came and got them all,” and speaks in such an awful way that I think children would be horrified–I was horrified. “I met Rosa mid-snore. I heard Hans’s last thought.” Creepy.

But wait–I forgot the book thieving part. It Just So Happens that Rosa does the Burgermeister’s wife’s laundry. Mrs. Burgermeister instantly likes Liesel (who walks the laundry back and forth) and lets her read books in her library. Liesel wants to take the books home to read to Max, the hidden Jew. That’s all. She “borrows” books from the Rich People and takes them back when she’s done. She has to sneak in a window to do this. I don’t know why she doesn’t just ask Mrs. Burgermeister for them. They could have conspired–a book could easily be hidden at the bottom of the laundry basket. She does this for years. No one ever catches her sneaking in and out the window. No rich people lock their windows during war years when the populace is hungry. No soldiers are quartered in the Big House. (I was searching for authenticity. I failed to find any.)

Then suddenly, everyone is dead. Except Liesel, who had fallen asleep in the basement, so the direct-hit-on-their-exact-house didn’t kill her. Nice basement. Rudy gets the kiss he always wanted, but, of course, he doesn’t know it. He’s dead. Mrs. Burgomeister suddenly appears! Liesel and she hug in a “you’re my daughter now” way. Liesel goes home with them, they don’t suffer at all in the American Occupation (even the Krupps suffered in the Occupation), and Liesel ends up overlooking Central Park, having married Max.

This is not a WWII movie. This is a children’s novel that should have been left there.

The acting is good. Other Geoffrey Rush films to see before you see this one: all of them, but I’ll mention particularly Shakespeare in Love, Les Miserables, und The King’s Speech.

Sophie Nelisse, who plays Liesel, is only 13 now, so it’s not surprising she couldn’t grow from 11 to 18. She does a great job trying to carry an entire feature film, but it reminded me of that awful movie Extremely Loud and Incredibly Close, where a little boy with problems has to carry a long movie almost unassisted. It’s a lot to ask from the actor and from the audience.

I’m not a fan of feeding The War to kids with teaspoons. Wait until they’re ready. Then teach them. Teach it all. Of course, they will hear things and learn the vocabulary, but starting out with a movie that says, “Little German kids hated Hitler and nothing bad happened. And Jews hid and then moved to Manhattan,” is not the way. These things may be true in a few instances, but not on the whole. My God, not on the whole. Wait. Then teach truth.