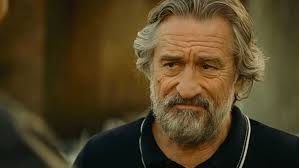 This is Robert De Niro playing Fred Blake, also known as Giovanni Manzoni, a Mafia boss turned snitch, and currently under the loving protection of the FBI’s witness protection program.

Fred and his family live in France, watched over by Tommy Lee Jones. Because of that watch-care, I wanted to laugh. I wanted to see Agent K in full-blown overwatch. However, Mr. Jones is just any ol’ FBI agent, and there are no memory wipes. Pity. I could have used one afterwards.

Anyhoo. Manzoni gave evidence against his fellow mobsters and they all went to the pen. One of them wants to find Manzoni. He “finds” a bunch of people who aren’t Manzoni, which he can tell by (SPOILER, but you’re not going to see this movie anyway, so it doesn’t matter) checking the fingerprint of the finger that he gets in the mail. Yeah, it’s that kind of “comedy.” As in, the kind that isn’t funny.

Also not funny is the 17-year-old girl wildly copulating with the teacher in his office. In America, we call this rape even if she (as she does here) tosses her panties at him. He’s a teacher. Maybe in France, it’s different. Ask Roman Polanski, he’ll know. But wait, Polanski was psychologically disturbed–his pregnant wife had just been murdered by the Manson family (okay, it was 8 years earlier, but still). The teacher here has no such excuse–a girl just walks in and says, “Hey, ya wanna?” and he goes berserk.

Same 17-year-old wants to let a boy know he shouldn’t touch her shoulder. She beats him bloody. Her brother deals with a bully in a similar manner.  Back to the girl: a classmate steals her pencil case (it’s pink, so I almost kind of understand her rage), and our little Mafia Barbie beats her into a need for an ER visit.

The mother is adorable and all Michelle Pfeiffery. I like that she blows up the grocery store for not having peanut butter and for ridiculing Americans. I mean, we blow up people all the time for not liking us, so no big deal, right? Anyway, that was the one funny moment, but we’d already seen it in the previews.

Moving along: the evil Mafia don in prison manages to find out where the “Blakes” are hiding. He sends a posse of Italian-American thugs over with an arsenal that must have netted a corrupt TSA agent millions in bribes–I mean, how did they get that firepower over there? Maybe they’re the Mafia and they have their own previously-stocked airplane.

They find the house. They aim an RPG at it. Boom! Uh oh, the kids are mad. Don’t mess with my Mafia-Dad or you’ll be perforated by the machine gun I stole out of your car, because I’m evil Dash and evil Violet and and and and…I just don’t like it when minor children kill people in movies. 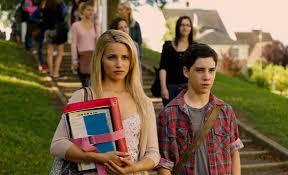 These are the sweet kids who (a) have random sex with teachers and (b) commit bloody mayhem in France.

The ending is not horrible. There is a disturbing-if-amusing similarity between this family and The Incredibles.

The worst part, of course, is when you realize you were conned. The movie was marketed as a collaboration between De Niro and Scorsese, which it isn’t. Scorsese did not direct this film. Scorsese was one of two executive producers. There are also a bunch of regular (non-executive) producers. There is even a co-executive producer, whatever that may mean. This is why I stay for the credits. Also to see whether there is an extra-scene at the end that will make it all better–for example, we could have seen them all lounging on an Indian beach, sipping out of coconuts with straws, while Tommy Lee Jones sat rigidly upright (with sunglasses) on a beach chair just behind them and to the left.  Alas, it didn’t happen.

Here is a shot from a move Martin Scorsese actually directed. See this movie instead. Of course, there’s way more violence in this one, and (possibly) a few more f*$&s, though I can’t be sure. 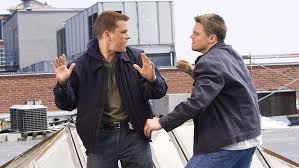