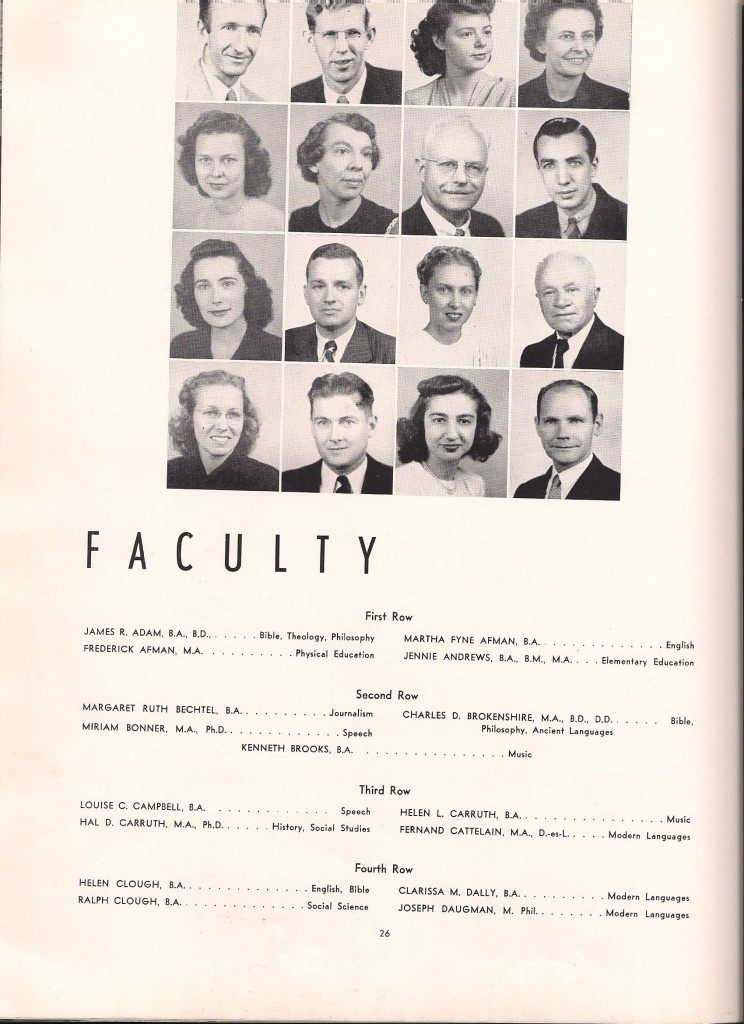 This is from the 1948 Vintage. See Mr. Clough on the bottom row? His wife receives around $150 a month plus a discount on meals. That’s after he worked at the University for fifty years and she twenty-five. Even uber-loyal Bojos have said to me, “Mrs. Clough slipped through the cracks.” There shouldn’t be cracks like that, now, should there?

Thank you for caring about my work. I appreciate the email and Facebook messages. Please continue to send stories, ideas, suggestions and old documents that are cluttering up your junk drawer (don’t worry; you’re not the only one) that might be helpful. My email address is sharonhambrick@hotmail.com.

Here’s an update on my progress:

I’ve been gathering information—stories, documents, IRS filings, cases (yes, I read the tax case with astonishment). (Generally speaking, if there is a case and it says your name versus THE UNITED STATES, that’s not going to be great for you.) I’ve got a working outline and a decent idea where to go with my paper on Bob Jones University’s Promise to its faculty. I’ll be sitting down over the next couple of weeks with hopes of finishing up a decent draft. Don’t worry, Brian’s taking vacation to doing Primary Parenting. My children will not starve or live in cardboard add-ons.

An old friend who teaches math at West Point is doing some math for me, so the section of the paper that answers the question, “What is the difference in dollars between what was promised and what is received?”—won’t be drafted for a few weeks at least. 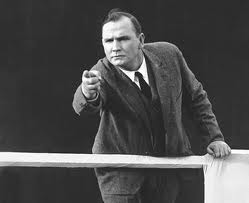 First, I have to say that the more I look into BJU, the more troubled I become. I have suffered a sort of psychological whiplash. Six months ago I thought Camille was a trouble-maker, a hater, a disloyal, disgruntled she-wolf, gnash, gnash.

After all, as Dr. Senior said, “A man who isn’t loyal isn’t anything.” (Standing Without Apology, page 148) Then–whoop, snap, ouch–my brain does a one-eighty and I wonder why I didn’t see all along that Dr. Lewis was saying something, and it was important. It is important. If she happens to say it in a way you don’t like, that doesn’t invalidate the information. (That you don’t like it being brought up that Bibb Graves was a Grand Cyclops doesn’t give him two eyes or remove his hood.)

“If we get a Jonah on the ship, and the ship doesn’t take him, we let the fish eat him! We throw him overboard. . . ‘United we stand, divided we fall.’ That is the reason that in this school we have no ‘griping.’ Gripers are not welcome here. If you are a dirty griper, you are not one of us.” (page 64) 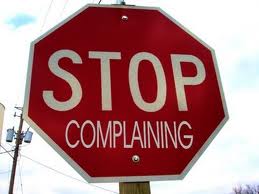 “Bob Jones was the sole controlling personality in the early days of the College and made all decisions relative to the cultural, religious and academic life of the school.” (page 83)

“If you are a griper in this institution, the trouble is you have got a sin buried in your heart…We are going to insist upon loyalty and cooperation.” (page 149)

There are lots more of these little gems in Standing. Buy a copy and have a blast.

Six months after starting to read and ask and ponder, I am appalled at how ignorant I was, how hateful of Camille (and others) and her (their) hard work, and how much more there is to learn. Scratch anywhere, there’s a mother lode of awful.

Secondly, I have gathered a number of theories under which the school might be sued on the Promise.

The old song-and-dance that this was an oral promise and therefore not enforceable is a load of cow patties. Oral contracts, even gratuitous ones–and this wasn’t that–can be enforced. The terms were clear: you work here for forty or fifty years, we’ll provide for you in your old age. These are nice and easy terms. A baby can understand them, and a court certainly will.

Another issue, the Statute of Frauds, comes up. The Statute of Frauds states that any contract that can’t be fully performed in one year must be in writing. Clearly, you can’t complete a forty- or fifty-year career in one year, so the contract has to be written down, right? Well, yes. But there’s a lovely little thing you can do to “take a contract out of the Statute,” and it’s called “having a sufficient memorandum.” Sufficient memorandum can be anything that indicates “the party to be charged” did in fact agree to the terms. Well, we’ve got it written down in Standing, for one thing (see page 237). We also have internal documents—faculty handouts describing the Promise, owning it. Here’s one: 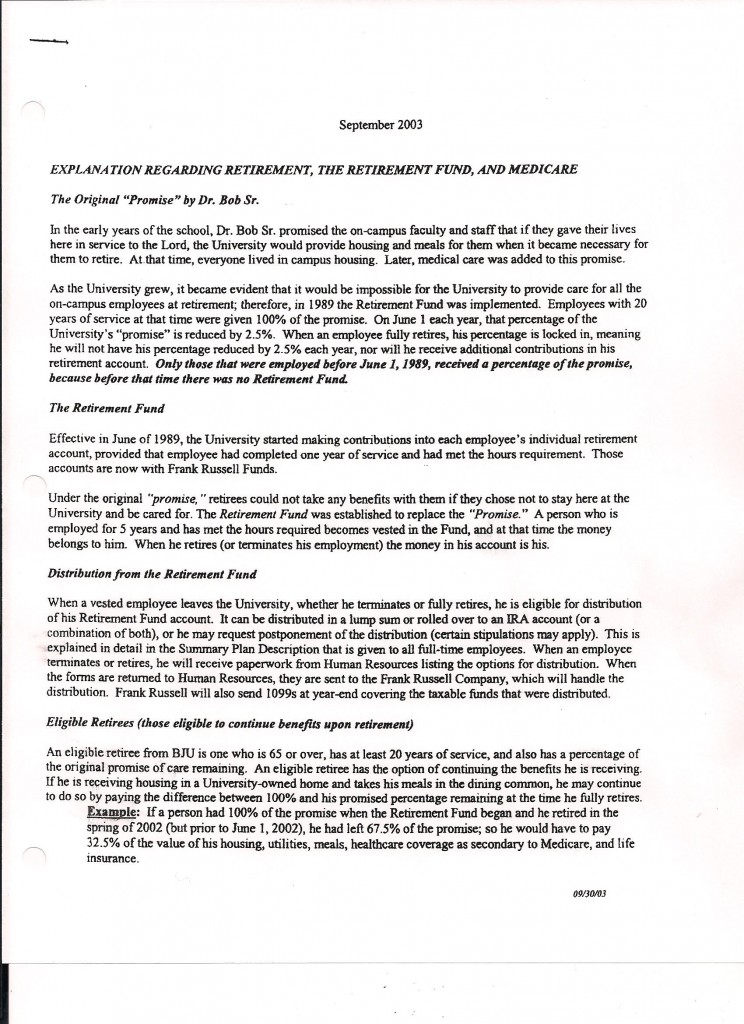 Obviously the Promise was made. Obviously the terms are clear. Obviously you can sue on it. And, if you read my piece about the Brooklyn Bridge, you can think about the unilateral contract approach. I think that’s a powerful argument.

Thirdly, naturally there will be some resistance to actually taking the U to court. Two things: One, they have no problem taking people to court when a need arises. They took the presumably-Christian Greenville City Council to court in the sixties over a zoning plan. They took a man’s children to court in 2001 over the terms of the man’s will—for the possibility of $150,000, they sued a man’s children for his life insurance money, when the life insurance policy was not mentioned in the will. And two, there is no other way to get a decision here on the righteousness of the situation—there is no governing body other than the Trustees; there is no outside accountability.

Fourthly, food stamps. Retirees might be eligible for food stamps. Go here to check. Please be aware, dear older faculty member, that food stamps aren’t what they once were. You don’t pull them out and look all obvious. There’s a card exactly like your ordinary bank debit card. You swipe it, you’re done. It gets loaded automatically every month.

You should not worry about any evil in taking government handouts. You worked for this—you built that side of Greenville with your sweat, tears, and lesson plans. You contributed. You taught students who went out and contributed. You’ve done your bit, paid your dues, run your race, earned your rest. You were promised food and instead you got a discount in the dining common, and you pay taxes on the discount. Take the food stamps if you qualify. In addition, there may be other government programs for which you qualify. I will try to find out what’s available.

In other fun news: 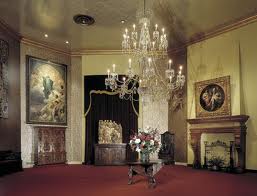 This is the M&G. On their FAQs, you will see this:

What is your collection worth?

It is a priceless collection, but we do not share the dollar value with the public. The paintings were acquired during a time when they were relatively inexpensive, and since then their worth has increased as the favor of Baroque art has swelled.