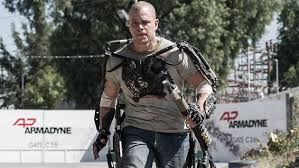 Mr. Damon is spectacular. You thought he had reached a pinnacle of awesomeness in Bourne. You were wrong. Here, he’s bigger and badder and grittier than ever, with just the right touch of compassionate protector that makes women swoon. Or maybe it does. For some women. I wouldn’t know. (ahem.) Ms. Foster sports a (to me) distracting accent, but she is amazing as always.

It’s 2154. All the rich people have moved to Elysium, a spaceship in geosynchronous orbit 19 minutes by shuttle above Los Angeles, a city ruined by poverty and crime.

Elysium is Utopia. The people are beautiful, rich, and healthy. Importantly, every home has a med-bay–a personal MRI-looking machine that can detect, diagnose, and cure any illness, from bone fracture to cancer to maxilofacial implosion.

Max (Mr. Damon) wants to get there. He needs to get there fast. He’s on a deadline. Secretary of Defense Delacourt (Ms. Foster) doesn’t want Max and his friends to land on Elysium. She wants to kill him. It gets violent. People die. Maxilofacial implosion occurs (and I’m putting it nicely). (Explosion might be a better word, but that sounds so very bad.)

A big fight ensues. People die. Others live. Many others live.

Cue giant music and cue people freaking out about the political “agenda” of this movie, because after all, a movie that talks about give-me-your-tired-your-poor is nothing but a huddled mass of open-the-border liberal gobbledygook. Right? Well, sure if you want to think that way–if you have never thought about what it must be like to be on the other side of the Rio Grande.

And even if this were an in-your-face rant about immigration reform (and it probably is), the US is not like Elysium in very important ways. For example, foreign aid–this flows out of our Treasury like water. For example, if you get here and show up at an Emergency Department, they are going to treat you. And so on. If it’s a liberal tirade (and it probably is), it is a straw man.

That said, it makes sense to reform the immigration laws, and if this movie gives people a little motivation to talk about that, so much the better.

Now, let us talk about the marvelousness of Neill Blomkamp and Sharlto Copley: These guys gave us the amazing District 9 a few years ago and now this. Good work, gentlemen. If you haven’t seen District 9, you should. It’s very like this movie in that it takes a political question and makes it talk-about-able by changing the setting and making us see the issue from the other side. And, it’s wonderful to see the actor who gave us the sweet and unfit-for-his-post Wickus Van De Merwe turn into a power hungry assassin monster. I’m a fan.