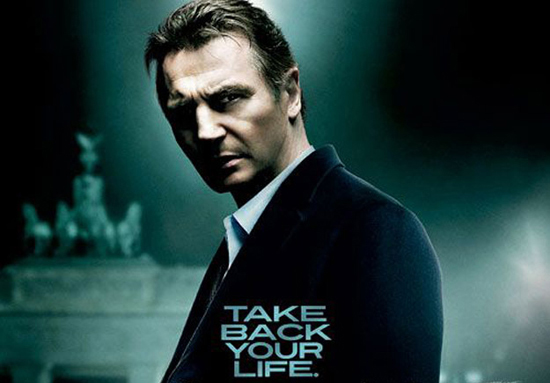 Listen! I have the greatest idea ever! Let’s make a movie about an assassin who has been in an accident and can’t remember who he is!  Then, let’s set the movie in Berlin! He can spend the whole movie trying to figure out who he is. Here’s some neato things we can put into this movie: tightly-choreographed hand-to-hand combat scenes, thrilling car-chase scenes involving taxis which involve numerous intermediary crashes and end with the bad guy lying there with his dead eye open and blood running down his face. Let’s drive a car off the roof of a parking garage! Let’s drive a car off a bridge into the water! And here’s another great idea: let’s have the amnesiac meet up with a pretty girl who will try to help him remember who he is! In the end, they can disappear into the sunset together. Throw in a pile of passports and currency to make getting around easier and multiple “assets” trying to do away with the hero, and we’ve got a movie!

Hey, you’re right: I’ve seen this one before! Done much better, by a much younger and better looking hero, with better and more intense fights, with more exciting car chases, and with a far sweeter relationship. In BOURNE, our hearts are engaged with Jason and Marie—we want them to be together. In UNKNOWN we are not allowed to want Martin and Gina to be together for the obvious reason that he’s a married guy. Nor do we care in the end that they do get together (when the impediment is no longer there), because we don’t actually care about Gina.

Some other problems: whereas BOURNE is emotional and intense from the first moments we see his inert body floating on the ocean, UNKNOWN floats along for the first hour or so wherein the only thing we know is that Dr. Harris can’t figure out what is going on. Also in BOURNE, the “skin scene” is fairly muted. Here, the Harrises enjoy a completely gratuitous steamy shower that is way too long.

In a bizarre plot failure, we don’t ever learn who the real bad guys are: that is, who financed the assassination attempt around which the movie revolves.

Sure, they tried to put some twists into UNKNOWN, but no one will be fooled. This is like Bourne Grown Old without the great supporting cast and the great music—I wouldn’t stand in line for this.