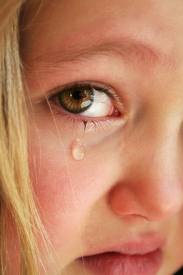 If you have to be told this, something is very seriously wrong. Why, when you hear of horrors perpetrated against your own child, would you ever for one second believe that you should be silent? That you should not fight for your child against anyone—husband, brother, father, deacon, elder, pastor, babysitter or father of children your child is babysitting–who injured him or her in a sexual way? Why are your claws not out, your eyes ablaze and your soul in full-on mother bear mode?

Probably because you were taught to be meek and quiet. And sweet. And silent. And that no one likes an angry woman. Proverbs teaches us, dontcha know, that enraged women are ugly. Or was that Rush Limbaugh? I can’t remember. So, calm down, honey. It’s not biblical for you to be so angry. Are you sure you’re in the will of God, because remember, whatever is not of faith is sin! Didn’t you covenant to stay married no matter what? Is there a root of bitterness growing here? Isn’t that the real problem? After all, a three-year-old won’t remember, and we need Pastor Whatshisname to keep Spreading the Gospel. You don’t want to be the one responsible for all those souls going to hell because Pastor would be out of ministry and unable to preach, do you?

And other foolish, hellish nonsense that unmothers a woman. That keeps her from tapping those two little buttons (the second one twice) when her children report horrors, invasions, violations, rapes.

We’ve allowed it. Eyes wide open, we’ve gone into marriages and motherhood believing we are not partners but employees or underlings or subordinates. We’ve promised to give up our very selves to cater to our husbands, to exhaust ourselves in church service, to obey everyone they can think of to put in authority/accountability over us, so that when the moment comes (God forbid) that our children need us to rise up in wrath and deal with wrongdoers with purpose and unwavering mother-strong diligence and fury, we wobble, we tremble, we cave to the mighty men who wear suits and talk all prosey and quote this and that into our ears until our spines have cracked, splintered, and dissolved.

We’ve allowed ourselves to believe that we are less important in our families than our husband are, less valuable to the Church than our pastors are. These are lies. These are damned lies.

A woman who covers up or ignores or “forgives” a boy or man who sexually attacks her child because she thinks that keeping the perpetrator out of prison is more righteous than protecting her own baby is seriously confused, to put the kindest face on it. She is deluded. She is weak. She is lied to. Do not be this woman. (I put the “forgiveness” in quotes, because how dare you believe you can forgive someone who raped your little child? That is not up to you. That is up to that child when she grows up and understands all the details and what that means in the scheme of the world—no minor child can do this, and anyone who asks her to or forces her to is seriously crazy. A 12-year-old girl who “forgives” the man who raped her doesn’t even understand yet what was stolen from her. She will find out later, as she grows up, after she is married, when she has children.)

Woman-up, mother! Allow no one to hurt your baby without the righteous vengeance of a mother pouring down in torrents upon the wrongdoer. Be enraged and don’t back down before your husband, your brother, your father, your pastor, anyone at all in leadership, or the “poor misguided young man” or anyone else who stole your child’s innocence. Stand up and start shouting down justice. Sure, do it quietly if you like, but do it. This is your moment. This is your job.

Like you, I have been hearing the horror-stories, reading the Complaint, and I can’t get over the rape of Christian women’s minds by Pastors and other leaders who have over and over and over again told women that it is more important to have their husbands home than to keep their daughters from being raped by these men, that it is more important that “the work of Christ go on” than that Pastors and other rapists be held accountable for their crimes, that “Church discipline” is more effective than being tossed in the slammer (or juvie) for sexual battery crimes, and that believers should never ever file lawsuits against one another—which is not what Paul said. Paul said, “Is there not someone among you” who can handle these things? Well no, in sexual battery cases (or child abuse cases of any other kind) there isn’t, because the Law mandates that you call the police, period. You may not deal with this in some churchy way, smooth it over nice-and-clean and let’s-all-forget-about-it and sopranos come in strong on the third stanza! Better yet, let’s have the men only sing the third—love those strong, masculine voices proclaiming the Gospel!

Be enraged, women of God, when you read that Complaint. People are afraid of angry women, and well they should be. Every adulterous and child-abusing pastor, elder, deacon, youth leader, or what-have-you in conservative Christianity knows that when his wife finally opens her eyes and decides to walk out the front door and talk about what went on inside there, his “ministry” is going to crash around his ears in a loud and public way. Own that power, wife. Do not be afraid. Walk courageously. Yes you can. Yes you must.

The news being what it is, it is incumbent on every church-going woman not to let her children out of her sight before informing them that there are bad people in the world and some of them are dressed up like babysitters and Sunday School teachers and youth group leaders. Some of them are called Pastor. If you are touched inappropriately—in your bathing-suit area—or if someone wants you or forces you to touch them in their private area, run, scream, and immediately call 911.

Tell your parents before telling anyone in church leadership. This should not make children too afraid to go to church—it will make them armed to go to church, and God help us that we have to arm our children with defensive weapons just so they can go to Friday night youth group, but if you don’t do this, it is on you when they get hurt and don’t know what to do. It is your business to tell them about this. Tell them today.

We have laughed at Catholic priests for their rampant pedophilia. We have snickered and scoffed at those of other-than-our persuasion who have “fallen.” Good and well. So, up and at ‘em, Mothers in Israel. And if you know of something that has been going on and you have been silent when you should have been screaming, just go get in your car, drive to the police station and start talking. What is all your picketing abortion clinics if you cannot speak up to the police for your own babies? What is all your ranting against same-sex marriage—because of the horrible things it will do to children!!!—when your own children are being brutally used in your own “covenant” home?

It goes without saying—oh wait, it doesn’t, so I’m going to say it—that if you are being raped, hit, shoved around, cursed, belittled, marginalized, or otherwise badly-used in your marriage, it is time to get help, serious help. If your pastors tell you to get over it, submit, forget about it, or understand he’s “just a man after all,” it is time to run for your life. Take your children with you.

Don’t worry. If he’s all that great and godly, he’ll make changes and come get you. But that’s another post altogether. For now, keep your children safe.