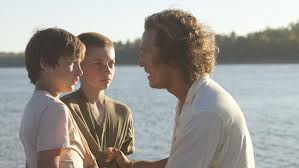 Ninety-eight percent on Rotten Tomatoes is nothing to sneeze at, so I went to see MUD this afternoon, a movie I had never heard of until this morning. I read none of the reviews, only gazed at that stratospheric number and thought, “They can’t all be wrong.”

They’re not. The movie is beautifully written, beautifully filmed, beautifully acted. There’s depth of story, depth of emotion, and plenty of tension. I didn’t know what was going to happen until it happened. The end is finely crafted with just the right amount of denouement after a brutal shoot ’em up scene. And, the motivations were correct, except when they weren’t.

Motivations are everything in a movie. Ask yourself, “Would that person do that thing in that situation?” When the answer is yes, you have good motivations going on. Take Saving Private Ryan, as an example. In that movie, everyone from the battle-hardened Captain Miller down to the frightened typist-interpreter does what they would do in that situation. Some keep their heads. Some don’t. But whether they do or whether they don’t, it’s because that is what that person would have done right there.

Motivations here were squishy, but I loved the movie so much as I was watching it that I didn’t notice them until I was home and thinking about it. Which embarrassed me. Because there are some doozies.

There’s a lot to talk about in this movie. It would be good source material for an ethics discussion with teenagers.

There are a few glitches, of course. Is there a movie that has none? In this one, two boys are able to see and identify an inch-wide tattoo on a lady’s hand from across the street. It would have been just as easy to have the lady walk past them on the sidewalk. That tattoo matters, so this scene matters.

Here’s the story: Mud is a fugitive from the law and from some bounty hunters. He somehow arrives on an island, and although the State Police are looking for him, no one looks there. Two boys go to the island for fun and run into him. He tells them a story. They buy it. He needs stuff. They go get it. Even though they are (at least tangentially) “persons of interest” in the hunt for Mud, no one follows them or wonders where they go in that motor boat every day.

Reese Witherspoon is the love interest. She and McConaughey do not interact and only see each other once. She plays a serially-battered woman. We see some of that.

The main character in this movie is Ellis, a 14-year-old boy whose world goes from This to That in twenty-four hours and then gets worse. In a very short amount of time, he falls in love, aids and abets a fugitive, stumbles onto a bunch of very angry men who want to kill his new friend, acquires a shiner, loses a girlfriend, and sees his parents’ marriage implode. Then it gets really bad.

Lots of suspense. Hopeful, but not necessarily right, ending.