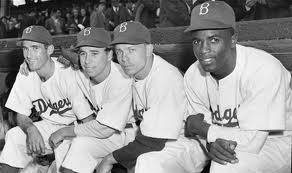 You will enjoy this movie about Jackie Robinson and the integration of professional baseball in 1947. This is the story of hard work, courage, and integrity.

However, I will not be taking my thirteen-year-old African-American sons. My young black men do not need to hear anyone shouting, “Nigger, nigger, nigger, coon, coon, coon,” any more than any young gay person needs to watch a movie where bullies yell, “Faggot, faggot, faggot, queer, queer, queer.” That it has turned out that black athletes dominate many professional sports today will not make my boys’ hearts hurt any less hearing this, and they have their whole lives ahead of them in which, no doubt, they will hear things like this.

There is also the issue of the kind white man who makes everything all better. Naturally, the movie could have been made to emphasize Robinson’s efforts more and Branch Rickey’s less, but the scriptwriter chose to balance the portrayal of effort more (in my opinion) toward Rickey. He’s the one who makes the plot move—Mr. Robinson is more passive, in the sense that his greatest contribution to the success of integrating America’s Pastime was to keep his head down, turn the other cheek, keep quiet and hit the heck out of the baseball, while Branch Rickey is the guy aggressively making it all happen for the good of baseball. It may be an entirely accurate portrayal for all I know, but I would like to know what Spike has to say about it.

One awkward moment in this movie: I was sitting there enjoying the movie, when, at the beginning of yet another baseball game (it may have been the last one, where they grab the pennant), someone begins to sing the Anthem (i.e., the World’s Most Unsingable Song) and sings it slowly from beginning to end, and I’m thinking, “What the—“ because, really, did we need to hear the entire thing? Then, at the end of the Anthem, the camera lovingly caresses the elderly male singer, and I’m thinking (again), “What the—“ because, “What?” I mean, really, if you are going to sing The Song, at least have the football stadium collapsing or fireworks or something else going on while the song is interminably happening.

Don’t yell at me here: one of my favorite memories is getting the chance to sing the Anthem at a high school basketball game on January 18, 1991 (look it up). True story, the person who was supposed to sing it didn’t show, and someone ran over to me and said, “Hurry!” and then, “You know the words right?” And all I could think was “Start low enough. Start low or the rockets red glare is going to be ugly.” But still. It’s too long to just sit through for no reason other than because you want your old relative to be in a movie.

Yep, that’s the answer I got in the credits. The anthem singer has the same last name as the screenwriter. Note to writers: don’t put yourself (or your father) in the story, even if you (he) does have a fairly decent set of pipes. Unless you are Stan Lee: then you know how to do this, which is not with the Entire Dawn’s Early Light Home Of The Brave. Put your dad in the stands with a pennant. Let him yell, “Go home, nigger!” if you want to give him a speaking part. Just saying. It was awkward, and he was no Whitney.

More awkward, and forgive me, that last paragraph was supposed to be the end, but I suddenly remembered that the screenwriter committed another sin which angers me, and that is that he started out the movie with this: “In 1945, American’s Greatest Generation came home,” which irritates me to no end. Stop with that Greatest Generation nonsense already. You know how Dr. Paisley says the AntiChrist is the Papacy Corporate—the entire line of Popes from Peter to Francis? Well, I’d like to steal that idea and state that the American Soldier corporately and generically (including sailors, marines, airmen, guard, etc.) is the Greatest Generation. Brokaw can lionize his parents and older brothers all he wants, but do not start with me on this. Those kids were not braver than these kids. Those kids were not more patriotic than these are. Posey’s daddy who sits in a wheelchair now because he gave the use of his legs to America in 2010 is not less a Hero, less a Patriot than someone who charged onto a beach in Normandy 69 years ago. That “Greatest Generation” lie is a slander against All Our Heroes. (End rant.)

Yes. See this movie. It’s great. Harrison Ford rocks the old man look as Branch Rickey. Lots of horrible repeated racial slurs. Also lots of change, good humor, hope for our own future. We can change. We don’t have to hate people who are different from us. Could we get that?

One thought on “42, starring Chadwick Boseman and Harrison Ford”