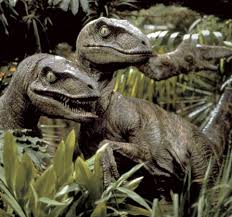 Bring a book for the first hour of JP3D, which is all set-up and reaches a level of boring that might have worked in 1993, but does not work in the days of Movies That Are Actually Exciting. If you are going to make a movie (or even 3D up an old movie), find a script with a story and some character development that doesn’t revolve around “Dontcha wanna be my babydaddy, huh, please?”

Nothing happens until everything happens and then you’re just running from dinosaurs, except when you’re patting them on the nose, because everyone knows that while you should definitely scream and rush off in terror from a carnivore that weighs a hundred thousand pounds, a vegan who weighs a hundred thousand pounds should be patted on the nose. Take that, meat-eaters!

Also fascinating was that Ellie, who is a paleo-botanist, knows all about the causes of the vesicles on the “Trike’s” tongue. A trike, of course, is a triceratops. Ellie knows more about what might cause the trike’s every-six-week’s lethargy than the reptile vet does, but that’s because she’s a woman. Any woman can figure this out. Duh. Bloating. The vesicles are from eating too much dark chocolate (92% cacao) trying to get through the week.

A little boy is shocked by 10,000 volts, and the only permanent damage seems to be to his hair-do. My hair is like that naturally, so I feel his pain, if not his electrification.

Not to belabor this movie at all, but there are two further points that I’ll hit and then we’ll be done. (That was the movie reviewer’s “In conclusion,” at which the congregation begins packing.)

First, it took the United States government ten years to map the human genome with the world’s best minds and the open wallet of the American Taxpayer behind it. The far-superior work being done in Costa Rica not only to map the dino DNA, but clone it, and maintain it until there are entire herds of adult animals is financed by a single man who looks like Colonel Sanders, with work done by about ten scientists who work in a small lab into which anyone may go who jumps out of the Intro Ride without having to gown and glove. So much could be said here, but you’re losing interest, so I’m going to move on to the worst part of this silly show.

It’s the sexist part. Ellie has a doctorate in paleo-botany, but her life will not be complete unless Alan (doctorate in paleontology, never mind he has no clue about tongue vesicles), who hates children, decides that he wants to marry her and have kids after all. He declares, “Kids smell,” which is probably especially true if they are walking around giant piles of dinosaur excrement all the time.

Alan’s lifelong aversion to kids is remediated by spending one day hanging around with an irritating little boy and a nerd girl (“I know UNIX. I can save the world.”). The kids take right to him–cuddling up in trees and helicopters–but I don’t blame them. They are obviously starved for affection. Their grandpa eats ice cream (“it’s melting”) while they are out in a storm being chased by omnivores. (I know they are omnivores, because one of them eats a man who is sitting on a toilet. What’s more omni than that?)

We’ve seen II and III, so we know the fatherhood bit didn’t take, right? I just hate that a woman so educated is so needy. She needs to find a man who (drum roll) wants her and her dreams for the future. (Bites tongue and does not give into temptation to rant about the silly idea that a woman should give up her identity/hopes/dreams to marry anyone. Check first that the hopes and dreams match.) Besides, if she had looked closely, she would have noticed it was the little girl who saved the world–at least temporarily–by locking the door. Alan doesn’t really do anything except stay with the kids, which may be enough in today’s world, now that I think about it.

The best part of this movie is, of course, Wayne Knight, the fat guy who gets killed by velocigoo.

The 3D is great, but sadly, no dinos (carnivore or otherwise) jump out at you.
If your movie budget is limited, see GI JOE: RETALIATION instead of this one. Nothing boring there.

3 thoughts on “JURASSIC PARK IN 3D, starring all those people and that funny fat man”