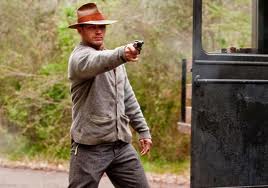 Here’s the story: During Prohibition, a family of three brothers runs a successful illegal liquor business, brewing moonshine in the forest. The thugs from Chicago arrive to extort protection money. People get shot. The G-man arrives. People get shot. The Sheriff goes all corrupt. People get shot. At this point maybe die-hard Second Amendmenters are cheering, but I was just bored and waiting for the story to start.

Shia LaBeouf’s character (strangely) falls in love with the daughter of a preacher who seems very Old Brethren to me, what with the foot washing. Preacher’s daughter turns out to be something (although not much) of a rebel.

So there’s a lot of shooting, and a lot of stills gets exploded. There’s a showdown at the County-line Bridge in which lots of important people are shot and some die. Nothing happens by way of criminal prosecution, apparently, to anyone. And then, Prohibition is over. Everyone who survived gets married, has kids, and lives happily ever after.

I don’t know. Maybe don’t write a memoir about your legendary-to-you relative. Maybe don’t buy the movie rights. Maybe don’t sucker us into watching it by putting up Tom Hardy in the trailer saying all gravelly-like, “I’m a Bondurant. We don’t lie down for nobody.” Alas, in the movie, we don’t see him say this—he says it, but the camera is elsewhere, I don’t remember where.

Again disappointing is the lame part played by the glorious Jessica Chastain, who gave us the unforgettable Celia Foote in The Help. Here, Ms. Chastain plays a dour ex-exotic dancer from Chicago. I wanted to her turn out to be an undercover Federal Officer. I wanted her to pull a gun on Forrest Bondurant and run off with Guy Pearce. She did what she could, but you’ve got to have a script.

I’ll talk about Guy Pearce, but not until I talk about the fact that when dealing with memoirs, it is often helpful to exercise dramatic license. That is, don’t call a slow-talking man from the South “Forrest.” Just don’t.

Back to Mr. Pearce, who was oh-so-Edward-the-Eighthish in The King’s Speech. Here, he’s wonderfully awful and marvelously hate-able as the Special Deputy in charge of shutting down the Bondurants’ business. I kept thinking he might make a decent Bond if there weren’t such a man as Daniel Craig in the world. (Of course, we all know, don’t we, that Daniel Craig shall and must hold onto the .007 role until Tom “Draco Malfoy” Felton is old enough to take his place.)

No comment was made, nor were questions raised, about the purpose, the effectiveness, the pros and cons of Prohibition. It would have been captivating to have seen a Pro-Prohibition Politician making a speech on just how dry the nation was, but of course, the Bondurants would have had to have a radio to hear it on, which they don’t. They don’t seem to have anything, really. They live a truly primitive backwoods life where the only possibilities of excitement seem to be those backed by the Second Amendment.

Maybe other people will be drawn to this movie, but I wasn’t. The setting was depressing, there is no smart dialogue, no witty cracks. Just hard men doing bad things on both sides of the law. I felt neither this way nor that about Prohibition itself, and although I tried to make a connection (wondering if they were going there) about the War on Drugs, my brain couldn’t work it out.

Shia LaBeouf, it should be mentioned, does a good job. He seems to be actually working on the movie, while others appear to have merely showed up to make-up and then obeyed when told, “Stand here” and “Say this.”

Jessica Chastain takes her clothes off to go seduce Tom Hardy, who doesn’t seem all that willing to give in–why she needs to seduce him and not the other way around is not addressed. Nor does he seem to be much taken with her afterwards.

Sorry for the boring review. I can’t think of anything to say that wouldn’t offend my Southern friends, and I have to keep the friends I have. Frankly, if I were a Southerner, I would be offended by this movie which once again, takes the South and makes it into America’s stupid little kid brother who can’t seem to get anything right.