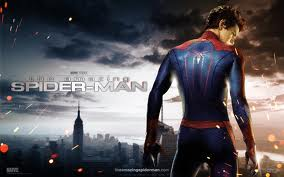 I went to the midnight showing and so am a bit groggy this morning, but I am awake enough to say that I loved the new Spidey, even though I didn’t intend to and didn’t want to. And, I think, if you’ll avoid making a line-by-line comparison (part-by-part, role-by-role), you’ll enjoy it too. Plus, the 3D is super fun. Definitely see it in 3D.

The difficulty this movie may face, if it faces any, is that the other Spider-Man movie was so recently made that it is still fresh in our minds. We are still afraid of Willem Dafoe (we have always been afraid of Willem Dafoe) and we still love and hate James Franco (more love, of course, because of Apes, etc.), and so forth. You have to actively not compare, and then you’ll be fine. I definitely like Emma Stone as Gwen far better than I ever liked Kirsten Dunst as Mary Jane, and I’m glad they didn’t load us down with the idea that a girl just out of public school would be the lead in a Broadway play. Yes, I know it’s perhaps even more unbelievable that a high school girl would have full-access to a genetics lab, but it’s more Go Girl (writer suddenly realizes this will offend all artists) and makes her less helpless than MJ, who after all, could only scream: she couldn’t actively help out in the saving of New York. Why does New York always need saving, anyway?

Another difficulty is that we know what’s going to happen, at least in a broad sense. We know, for example, that Uncle Ben (Martin Sheen) is going to die (he always dies), so we’re waiting for it, looking for it, and then when it happens we say, oh good, that’s over. Sally Fields is Aunt May. I liked her (I really liked her); she emotes perfectly throughout–we see how her love for Peter grows through the years.

Rhys Ifans is great as the mad-scientist-turned-evil-reptilian. (You may know him better as Luna’s father or as Spike in Notting Hill.)

I especially liked Andrew Garfield in the role of Peter Parker. He plays a sweet nerdy kid who longs to know who and what his father was, where he went, and why. At the end, we are left wondering too.

The best thing about this movie is the timing of its release. A month ago, it would have been crushed by The Avengers, but now, people who are still raving about Avengers (me) have seen it enough times (six) to say, “Okay, I can move on.” Nothing else is on until Bourne Legacy comes out, and it’s a very very long Fourth of July “weekend,” so this movie should do well.

I’m going to see it again before I decide for sure whether my boys (12 and 13, not the 8—absolutely not) can see this. It was a bit dark, but I may have been skewed by the fact that I did go at midnight and all movies seem creepier late at night.