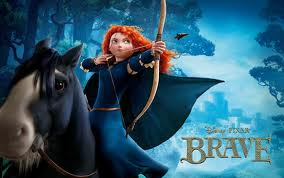 Seriously, people. Do we really need one more movie to tell us that women may choose whom they marry? Have we not—and has Disney not—answered this question gazillions of times? Cinderella may marry Prince charming (socio-economic gap), Sleeping Aurora may marry What’sHisName (consciousness gap), Ariel may marry Eric (species gap), Jasmine may marry Alladin (housing gap), Rapunzel may marry Flynn-Eugene (criminal gap), Tiana may marry Naveen (royalty, species, housing, economic gap), and Belle can marry an erstwhile buffalo (all that).

Not only may you marry whom you like, you may undertake difficult and stereotypically-male pursuits while still being an effective princess. Mulan saves all China. Eve saves the Earth. Tiana saves New Orleans cuisine from super-racist overweight real estate twins simply by adding Tabasco.

In Brave, Merida saves herself from a loveless marriage, which is great, but is it enough to power a Pixar film? We expect so much more from Pixar. We expect story making at very high levels. We were disappointed here.

My niece is in this movie. Look:

Going on, there should be no young American women left among us who think their lives are mapped out for them thusly: school-secretarial or teacher training-marriage-diapers-boring retirement-death-amen, and I don’t think there are. Any girl who goes to school (even at home) knows that there is a world out there full of fascinating careers and choices. It is not news to anyone (except perhaps the Doug Wilsons and Doug Philipses of the world) that women may take up such activities as archery and horseback riding if they desire to and have the means. Princess Anne did away with all remnants of doubt when she rocked the ’76 Olympics and that’s only if you don’t count Molly Pitcher, Joan of Arc, and (further back) Boudicca. The question has been answered. We need less re-asking and more reflection on and celebration of real acts of real women not overcoming their gender, but simply wearing their womanliness while doing whatever it is they are doing to save the world.

(This is perhaps the most disturbing thing about Brave: that the mother insists that her daughter follow her into arranged marriage and then the girl apologizes at the end, a sort of throwback to My Fair Lady in which we have a couple of hours of Go Girl rhetoric and in the end she gets his slippers and I go vomit, but at least there was a lot of pretty singing, some of it, regrettably, by Freddie.)

Instead, the mother and daughter should run away until the horror of arranged marriage is dismantled by decent men, and if the clan leaders won’t take the lead here, why are they called leaders? Why do men want to marry women who don’t want to be with them? There’s a word for marriage relations without consent; it starts with the letter R. But I digress.

(More digression: author thinks about paralleling the idea of arranged marriage with the current wave of courtship, but has too many friends and acquaintances who think this is a neato idea, so decides not to go there.)

Also offended should be men who do not measure their value by chemical quantifiables such as sperm count and testosterone levels. There is a young clan leader in Brave who is seen as repulsive because he is not he-man-y in the ordinarily accepted sense. For all we know, he may be a gifted intellectual or talented artist, but because he doesn’t have Hulk-esque arms and isn’t as adept at the pec-bounce as another of the suitors, he is disdained. Oddly, he may have paired well with the outdoorsy Merida who might like to come home to a hot meal and a good foot rub.

So far all men and most women should be offended by Brave. Not all will be. Young girls from 2 to about 22 will enjoy it.

In particular, young girls who are troubled by what they see as their trapped social condition will enjoy this movie as a sort of metaphor for their own Belle-like longing for the Great Wide Somewhere. Girls like this sort of angsting hopefulness.

However (take note, girls), if these girls will look around, they will see that they are not at all trapped. They live in a situation in which they can see movies of this sort. They have enough money to enjoy the cinema, probably with friends and popcorn. They go to school. They go to work. They can move out, move along, move up, move over. They need not marry now, later, or ever, anyone they do not wish to marry. If they do wish to marry, they can do so when the meet the right person, whether or not the whole world approves.

The trouble with the young girl today is not that she is forced to marry someone for whom she does not care, but the fact that she wants to marry and settle down now when the person for whom she longs either does not know her, does know her but doesn’t care about her yet, or isn’t yet ready to make a lifelong commitment. Her problem then is not forced marriage but ennui, lack of patience, lack of direction, or lack of having absorbed the theme of He’s Just Not That Into You, than which very few movies are more important for young contemporary women. (How often do I have to say this: if he’s not calling, dating, proposing, it’s because he doesn’t want to. Men do what they want to do, and a man who has to be that kick-started—‘C’mon, please, honey, dontcha want to marry me?’ doesn’t want to. Stop crying and move on.)

This young girl will like this movie because young girls like movies in which they can imagine themselves heroic, when in fact what they need to be doing, in order to advance their lives, is (1) their homework and (2) some mental adjustment about what it means to be a confident, fulfilled, and successful woman.

This is not Pixar’s best movie, nor does the story climb near the heights of Pixar’s previous works of story. There is one linear tale, unsurrounded by complexity, depth, or inner turmoil. The girl simply isn’t interested in any of the three boys on the menu.

Nor do they want to marry her. They are gleeful when relieved of what would also have been a forced marriage for the “winning” young man. Everyone waves happily all around at the end. There is the now-obligatory end-of-credits micro-scene, complete with wood carvings, but sadly sans shawarma.

Pixar, also regrettably, adopted the if-you-can’t-beat-em-join-em motto vis-à-vis the issue of potty and body humor. Previously we were spared this joke form in Pixar movies. No longer. Butt jokes, naked jokes, and a little bear doing a Greg Louganis into a women’s gigantic bosom to retrieve something she’s stored there. (I walked around London, summer of ’83, with £1200 in such a situation, but I wouldn’t make a movie about it. There was one other time with a cigar, but again, explanation would probably not be terribly edifying.)

It is also unsettling that the only way Merida finds the solution to her problem is by little magical beings showing her the way. The answer is not “in her” as we are told at the end. Rather, it was communicated to her by glowing blue wisps that lead her to a witch-with-a-spell who needs to get the threading kiosk at the mall poste-haste.

Your young children may enjoy this movie. Mine didn’t. Probably because they are boys and they don’t care at all whether the girl has to get married, and they weren’t afraid of the bears, one of whom is scary (but we don’t see much of him, and there isn’t really any suspense) and the other of whom is ridiculous, if strangely sympathetic.

The “short” at the beginning was odd. I didn’t understand it. Shorts should be more clear like the one with the sad little cloud–remember that one?–that gets all the dangerous babies, or like the Magician one or the Barbie-and-Ken-Don’t-Get-to-Go-to-Hawaii-But-It-Works-Out-Okay one. “Night and Day” was horrible and this one was only a little better. It’s called La Luna and is about three generations of moon sweepers who have poor diction and a very long ladder.