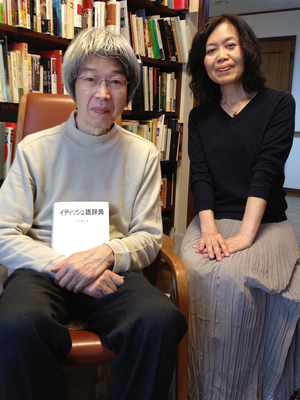 It’s not everyday a feature on NPR lays me out cold, squeezes my heart, and causes me to rethink my entire life, but the story of Kazuo Ueda did just that.

Professor Ueda lives in the hills of Southern Japan. While studying German, he fell hopelessly, deeply in love. With Yiddish. So much so that he spent decades studying Yiddish—including taking several trips to Israel—for the sheer joy of realizing that a mish-mash tongue gathered up from Russian, German, and Hebrew, so forgotten that even few Jews understand it, could be untangled, ironed out and translated into Japanese.

Lonely work done over a lifetime to produce a work of art that perhaps very few people will ever know about or care about. That most people will look at and say, “Why’d you do that?” or “What in the world?” or even “What a waste; think of the important work he could have done instead.”

You may be doing this sort of work. The seemingly small, seemingly—at least to others—unimportant task that you are joyfully pouring your life into. Others might have chosen to abort—you chose to carry that special needs child. Others might have left the injured soldier—you chose to stay: you chose to honor sacrifice with the kind of love that says, “Nothing is different; I married you, not your legs.” Others might have given in to the mid-life crisis, the come hither, the “no one needs to know.” You chose to wrench your mind and heart back home, even when home seems boring, even though you feel you want and deserve so much more.

You chose to keep grandma home, to go to grad school, to help at the shelter, to work extra hours to pay for village wells on the other side of the world, to sweep the corners no one sees. To do whatever you’ve chosen to do that others think is unnecessary, over the top, patently nuts. You’re doing an Ueda. Keep it up.

For the Christian, the truth is we need to become experts at this kind of intense, decades-long translation effort. The lifelong work of translating the Gospel–delivered long ago and usually presented in Shakespearean–into New Millenium American, into Contemporary Kid-ese, into 2012 Teenage-ian. We need to do this with care, with precision, with love.

We have to translate “God is love” into “Sally-ese” or “Johnny-ese” and say, “Yes, you told me to drop dead, and that hurts my heart, but just so you know, God won’t hold that against you, because Jesus already paid for that. That’s the Gospel. Come to Jesus.” Of course he’s still grounded—duh—and maybe during those lonely hours in his room, he’ll think about what you just said. Maybe he won’t. Doesn’t matter. You translated correctly.

Truth is, I usually separate my “grace talk” from my “Mommy talk,” and the “Are you kidding me? What were you thinking, son?” almost always wins when I am confronted with one more stupid-kid-behavior that could never in a million years have been prepped for. I need to work on my translation skills. I need to diagram my sentences with a lot more care.

The Japanese-Yiddish dictionary is 1,300 pages long and has 28,000 entries. Ouch. Meaning, Professor Ueda didn’t give up when the puzzle was intricate, the untangling difficult, or when he was tired or not feeling well. He kept at this lonely, joyful work knowing the world would not stand up and cheer. Knowing the world would say, “What the–?”

He plodded along, researched, stuck to it, lost his health to it (he now has Parkinson’s), and in the end, he finished his work. The dictionary is complete. It costs $700. Considering the work and the few copies available, this is a steal. You yourself have paid over $100 for a run-of-the-mill textbook some publishing house put out in two years by hiring out the chapters to experts who already knew the stuff. Here, one man, with painstaking care, took a topic (literally) no one had ever (ever!) imagined, and threw down. He looked at impossible and took the challenge. He looked at this Everest, set his face to the summit, and climbed.

It’s time to do some Uedas and translate better, clearer, with exact precision, with more care so that the people we are speaking to can understand us. So they can hear Jesus speaking.

We need to be translating Jesus faithfully, precisely and with love to the block bully, to the Muslim family next-door, to the gay couple in the back row.

And not just away from home, but right at home, where the difficulties are, the really tricky problems, the most painful crises. That’s where the toughest translation happens, where you really have to grit your teeth, face the untangleable and realize that the hardest parts are the most important.

That’s where you translate the Gospel thus: “I never thought you’d abort my grandchild, but that doesn’t change my love for you, and Jesus has already paid for that. Where do we go from here?” That’s when (after you finish sobbing and pick yourself off the floor and search for breath) you say, “I’m sorry you’re leaving me, but Jesus already paid for that, so I’m going to lean on Him and go from here instead of badgering you about it endlessly.” That’s when your son tells you he’s gay and you don’t collapse into a heap of sobs, but give him a bear hug, thank him for telling you, and reiterate the enormous amount of love you have for him, without shouting and calling down fire and brimstone. Remember, Jesus only ever yelled at Pharisees, only ever trashed a Temple, so don’t you go and mistranslate Him to needy sinners.

Remember: It doesn’t matter if no one buys the book. It matters that the translation is done with care, with precision.

Thirteen hundred pages, 28,000 entries, twenty years. No one said it was going to be easy to plod on, to untangle the untangleable, to communicate the eternal, to translate grace til Kingdom Come. Kazuo Ueda has given us a pattern of patience, a visual of perseverance.

One thought on “A THOUGHT ON KAZUO UEDA”