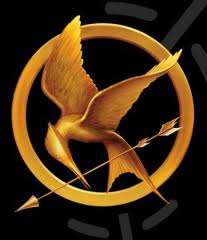 I had no intention of going to Hunger Games. The previews had not interested me, and I suffer from an affliction that can best be described as “if everyone likes it, I don’t.” Still, my nieces read the Hunger Games, so what’s an Auntie to do?

Brian went with me, and we pinky-promised each other we wouldn’t leave until the end. Okay, not really–we’ve never pinky-promised about anything, if you must know–but we’d decided that if necessary, we would hang on to the armrests for dear life.

No such restraints were necessary. From the first moment of this movie until the end of the credits, I was on board. It is an emotionally intense movie powered by an intriguing and well-motivated idea, interesting characters, and a series of eerie settings. I loved it.

The story: many years ago, an uprising against the government occurred. Having defeated the rebels, the government has cordoned everyone off into 13 Districts. To show their continuing overlordship, each year the government puts on a television show, The Hunger Games, in which 24 young people (2 from each of 12 Districts) battle to the death. The last survivor wins a lifetime of riches, glory, and fame. No mention is made of District 13, and so I suffer in agonies of not knowing. Where is District 13? What (if anything) happened to it?

Jennifer Lawrence plays Katniss Everdeen, the girl “Tribute” (hunter) from District 12. Katniss is a real warrior woman who displays strength of body, mind, and character. When tempted with evil, she doesn’t give in. In peril, she stands firm for what she knows to be right.

Others are not so virtuous, but allow the dangers and frights to bring out the worst in them. Perhaps when one is in a life-or-death struggle, one’s true character will inevitably manifest. A selfless person is a selfless person. A thug is a thug.

If you’re homeschooling teenagers, and they’re up for this sort of movie (not all kids are–mine are too young, but maybe 14 or so?), there are endless topics that could be discussed: civil resistance, loyalty, self-defense, killing in war, and so on.

Yes, children kill each other, but you can see that they are made to do this in the interest of not dying themselves. (Yes, I know that duress is no defense to murder; I had that class.) The most violent action sequences are blurred with hand-held jiggly cameras (not so much that you get queasy), so you don’t see close-up murders as you would on, say, CSI: Miami.

The acting is great. And Stanley Tucci has blue hair. What is better than that?

I was in suspense the whole time. I cried when a little girl dies and her father is shown grieving. I gripped Brian’s hand fairly hard throughout. There’s enough of a thriller here to engage anyone’s interest (boys will like it) and enough you-go-girl with the tiniest of romances on the side to interest the girls.

This movie is going to make bank, and some of that is going to come from my going again. Loved every minute. My only questions now are, “How evil is President Snow?” and “Should I read the second book before the next movie comes out?”